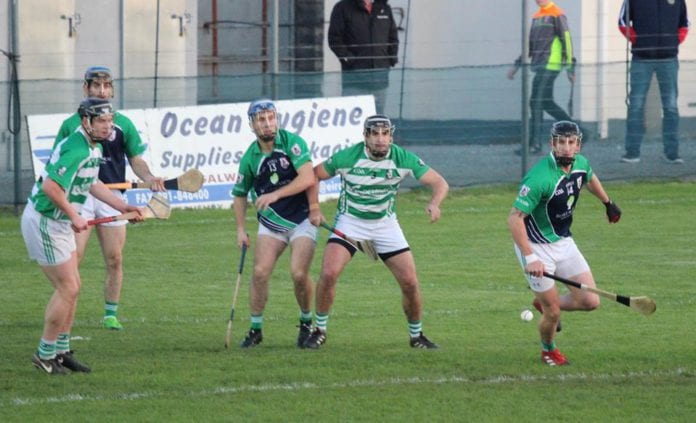 Under the lights, Killimordaly won this crucial shoot-out to book their place into the play-offs and a meeting with Athenry on Sunday (7th October).

Liam Donoghue’s team were three behind approaching half-time before getting back on terms.  And when Brian Burke struck a 42nd minute penalty, Killimordaly were 1-14 to 1-8 leaders.

As little as it currently means, this has been a progressive year for Ballinderreen who were only promoted in 2017.  They earned their right to play an effective play-off in the final round of group matches.

Killimordaly made the better start going 0-5 to 0-1 ahead on 11 minutes.  Burke got his first, Jack Fitzpatrick the second before another Burke brace and Tomas Madden gave them their four-point cushion.  But Ballinderreen weren’t relenting from their work load and got back into contention.

Roy Lane contributed a brace before Burke made it 0-6 to 0-3 on 13 minutes.  However, after Lane brought his tally to three, Ballinderreen made the breakthrough.  Kevin Lane came in from the right and Sean Coen was perfectly placed to deflect the ball into the net.

Scores for Sean and Niall Coen, and Kevin Lane had Ballinderreen in control leading 1-7 to 0-7 on 24 minutes.  But Killimordaly struck three important points before half-time through Burke (2) and Creaven.  And within two minutes of the restart, Burke added two more.

Kevin Lane reduced arrears but Burke and Eanna Ryan replied.  And on 43 minutes, Burke hit the net but two Niall Coen points for Ballinderreen meant this game wasn’t over yet.  Ryan and Burke restored the six-point cushion, Kieran Ryan split the posts but Burke completed his evening’s work with another free.

Roy Lane had an effort deflected while Ryan forced a superb save from Padraig Daly as Ballinderreen couldn’t find a way through.  On 65 minutes, full back Colm Meehan’s free sailed over the crossbar to leave five between them in the end.