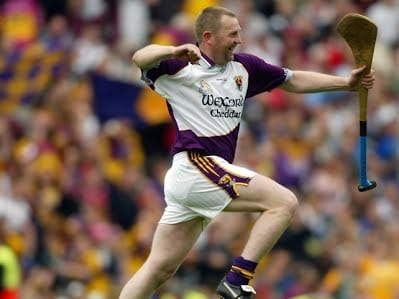 Former Wexford All-Ireland winning hurler Damien Fitzhenry believes this Saturday’s (2nd June) Leinster Senior Hurling Championship clash with Galway is their game of the year so far and believes the work done at underage level in Wexford is starting to reap dividends.

Fitzhenry was speaking at the launch of the 2018 Bord Gáis Energy GAA Legends Tour at Croke Park that will see Football and Hurling greats hosting exclusive tours of Croke Park stadium and museum over the summer to mark the museum’s 20th anniversary.

“It is the game of the year so far for ourselves,” said Fitzhenry to Cian O’Connell from gaa.ie. “We have a huge task ahead to take Galway’s scalp and the only thing that is in our favour is that the match is below in Innovate Wexford Park.

Former @OfficialWexGAA hurling goalkeeper, Damien Fitzhenry, believes the current team need to take the next step of winning some silverware this year.

“Look, these are the teams that you have to put yourself up against – the All Ireland champions – it is a great year to be doing it. This weekend is a huge game and if we win it, I think we are looking at a Leinster Final.

“It is great to see Wexford coming up against these teams. Last year we got into a Leinster final, we hadn’t been in a Leinster final for a long time. I know Galway beat us and we will be looking to change that this year.

“We are coming back now to see the fruits of a lot of work done at underage over the years. That is of huge importance to keep it going.”