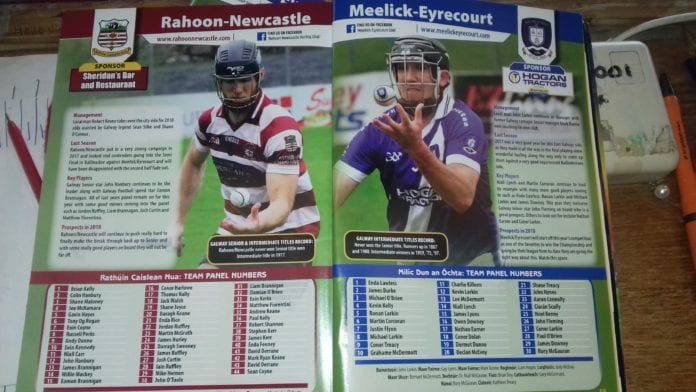 Two late goals from John Hynes and James Lyons gave Meelick/Eyrecourt an opening victory after they overturned a 0-9 to 0-8 interval deficit.  Rahoon/Newcastle, without county footballer Eamonn Brannigan, got off the mark through an Andy Dunne free before Nathan Earner levelled on two minutes.

Both clubs enjoyed purple patches and Robert Keane’s men took the early initiative building a 0-5 to 0-2 lead by the eighth minute.  Dunne added two scores including one from play following a Jordan Ruffley pass.  Eoin Kennedy and John Hanbury, after a sprint down the left flank, got the others.

Meelick/Eyrecourt were runners-up last year and were determined to justify their tag as one of the tournament favourites.  Lyons had earlier converted their second minor after being set up by Dermot Dunne and Conor Treacy.

Niall Lynch was their first half talisman and along with a Michael Larkin point, he tapped over three placed balls to give them the lead on 17 minutes.  But two Andy Dunne frees and another Kennedy point left it 0-8 to 0-6 in Rahoon/Newcastle’s favour.

While the contest hadn’t sparked into life yet, it was still hard to call.  Meelick/Eyrecourt’s Charlie Killeen reduced arrears before Andy Dunne restored the two-point margin.  However, Dermot Dunne left the minimum in it at half-time.

Despite being against the elements, John Larkin’s team stamped their authority upon the restart and outscored their opponents five points to one in the third quarter.  Larkin, Killeen and Lynch were on target before wing back Dermot Dunne put them 0-13 to 0-10 ahead.

Andy Dunne got Rahoon/Newcastle’s first and former Galway centre back Tony Og Regan sent over a long-range effort to leave their deficit at two.  But they didn’t score again and finished the second 30 minutes without a white flag from play.

Earner made it 0-14 to 0-11 before Hynes, just after being introduced got the first Meelick/Eyrecourt goal.  A long Ronan Larkin delivery saw Lyons catch the Rahoon/Newcastle defence off guard for the second major.  Substitute Grahame McDermott concluded the comfortable margin in injury time.

Just received from Galway hurling board.

Game Rahoon/Newcastle V Meelick/Eyrecourt will not be played today as we have failed to secure a venue,
but this fixture will take place tomorrow Monday at a venue to be determined.