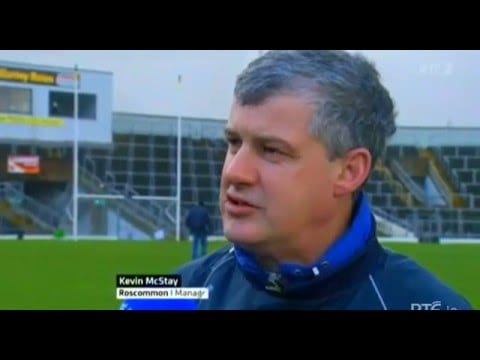 Roscommon football manager Kevin McStay has said that while Galway would have to command their respect, his team won’t fear them when they meet in the 2018 Connacht Senior Football Final on Sunday (17th June).

Speaking to Michael Scully in the Irish Mirror, McStay said that Roscommon have had their moments against the Tribesmen (e.g. 2017 Connacht Final) and that they were Division Two Champions.

“I would’ve said before the Galway- Mayo match that they were playing to see who was the second best team in the country,” said McStay.  “Galway won that, they were in the Division 1 final so they have to command our respect.

Kevin McStay names his team for @ConnachtGAA Final against Galway. 33 out of 34 players available for selection. Only Ciarán Lennon (Broken Thumb) not considered due to injury, otherwise a clean bill of health for 2018 Connacht Final #rosgaa #gaa pic.twitter.com/qvK4QMGzGb

“We would respect them – but I don’t think any of us would fear them.

“It’s very similar to last year in that the national narrative is that we’re a considerable distance behind Galway.

“I’m not going to argue with it. We were not even in Division 1 – but we will have no fear of it.

“Last year we got a little step on Galway. But we never kicked on like Galway kicked on – so there’s a lot up for grabs in this final.

“Not to be in the Super 8’s would hurt this group because if it’s not us, it’s going to be Galway, Mayo, Tyrone – or some other team we’d like to think that we could compete with in the future – going to get three All-Ireland quarter-finals that we won’t get.

“Some people tend to undervalue Connacht medals but we certainly don’t. For us to get a pair of them in a row would be unreal – and would launch us brilliantly for the campaign.”