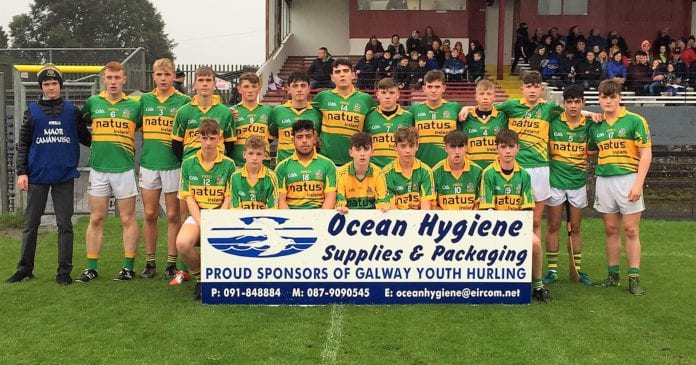 With a surge of scoring either side of half-time, Gort seized the initative in Duggan Park, Ballinasloe to take the shield trophy.

Patrick Cummins, who finished with 2-8, got the first goal before Turloughmore enjoyed their best spell on a wet, Monday night.  But at half-time, it was the south Galway team at the front.

“(In) the second half, we played really well,” said Galway’s All-Ireland winning goalkeeper in 1987 and 1988.  “The first half, it was a right battle.  I think there was a point in it at half-time.  At half-time in the dressing room, we thought the match could go either way.

“We just said to the lads, get out and try and hurl the way they’re able to hurl. Turloughmore had bet us by four or five points earlier in the year in the first round.  And we were saying try and lift the game in the second half.

“We got a good start in the second half.  We got the first few scores.  And I think we played ourselves into the game.

“The goal was probably a great start for us to get.  Three points are hard to get on a windy evening, wet evening.  Horrible conditions but Turlough started really well.  I think the goal was crucial for us in the first half.  It kept us in the game.  But at half-time, it was anybody’s game.

“They lost this final last year by a couple of points to Carnmore.  The one thing about them, they’re battlers!  They’re a great group and they die for each other.  And the one thing, they’re great friends and to me, that’s huge.”