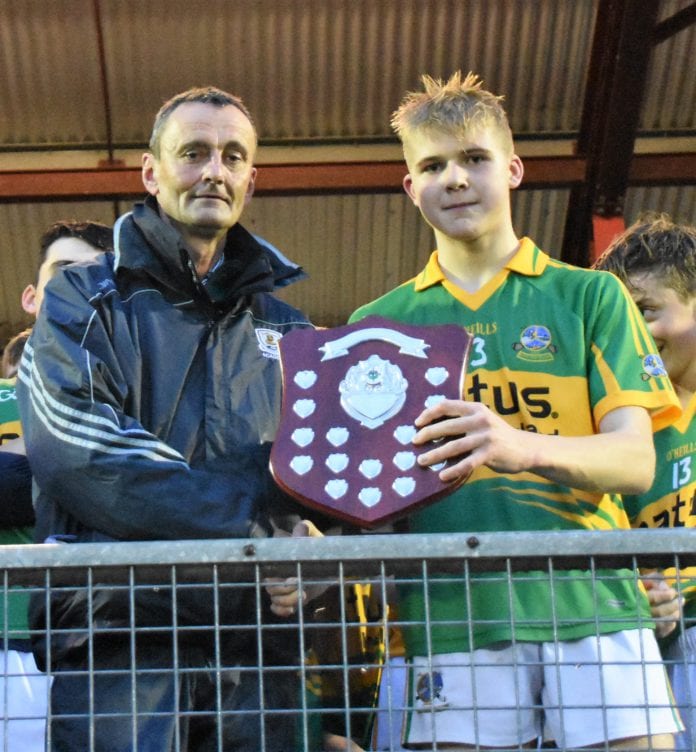 Seven unanswered points either side of half-time swung the pendulum in Gort’s favour as they built a match winning lead in Ballinasloe.

Patrick Commins’ two goals were also crucial but it was seizing back the momentum following a Turloughmore purple patch had the north Galway team 0-7 to 1-2 in front after 23 minutes.

But three white flags before half-time gave Gort the lead.  A Nathan Gill free reduced arrears before Commins landed two scores, the first set up by Niall Cunningham, to make it 1-5 to 0-7 at half-time.

And after the restart, Martin Killeen’s team didn’t relent as Gort put distance between them.  Gill converted two from play, including one from 65 yards.  And Commins profited from a breaking ball after Mark Duffy’s short was saved by Darragh Walsh.

Another Commins free gave Gort a 1-9 to 0-7 lead before Keith Moloney ended Turloughmore’s scoring drought on 41 minutes.  It was their first in 18 minutes but by the time Cian Shaughnessy got their next eight minutes later, Gort were out of sight.

Adam Minogue took Duffy’s pass for a point.  But when Tiernan Finn and Eoin Cooley combined to drive a long ball towards the Turloughmore goal, Commins ran onto it and finished to the net.  Two more minors for Gort’s ace marksman had them 2-12 to 0-8 clear.

After Shaughnessy registered, Minogue hit back for Gort and when Shaughnessy sent over another Turloughmore placed ball, they were 2-13 to 0-10 in arrears.

Turloughmore needed a goal but the closest they came was when Eoghan Conneely’s ball saw Moloney’s snap shot stray wide.  It summed up their evening even though they finished with further points from Kian Cummins and Moloney.

Gort had attacked from the gun and led 1-1 to 0-0 after three minutes.  Commins got both scores but they only added one more over the next 21 minutes as Shaughnessy led the Turloughmore fight back getting six white flags and centre back Evan Farrell sent over a 65.

But at 0-7 to 1-2, that was as good as Turloughmore’s night went.  The lights went out for them as Gort’s half-back line, led by man of the match Eoin Killeen, cut out the supply and ensured they finished 2018 with silverware.