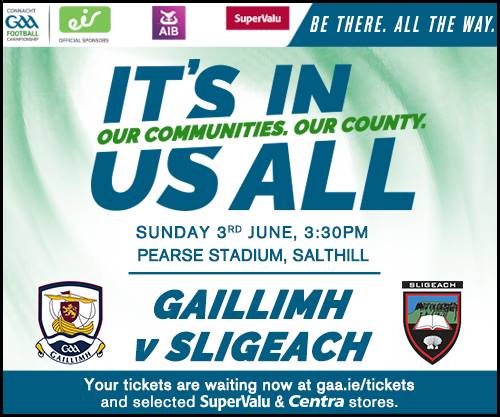 Galway football manager Kevin Walsh has made four changes from the team that beat Mayo for their Connacht Senior Football Semi-Final against Sligo in Pearse Stadium on Sunday (3rd June).

David Wynne and Sean Kelly are called into the defence replacing Eoghan Kerin and Gary O’Donnell.  Eamonn Brannigan come in for Ciaran Duggan and is named in the attack.  And Corofin’s Ian Burke starts at corner forward instead of Sean Armstrong.

The team is captained by Damien Comer.

Sligo manager Cathal Corey has named an unchanged side from that which dispatched London 1-21 to 1-11 in Ruislip four weeks previously.  Midfielder Kevin McDonnell captains the side.