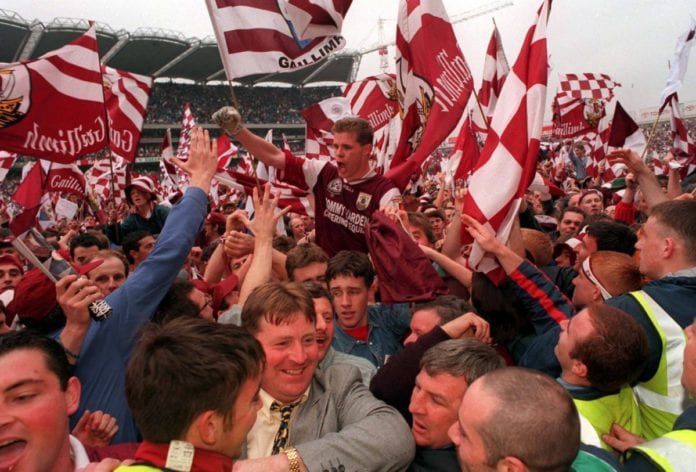 It was the first time the Tribesmen won the Sam Maguire since the three-in-a-row success concluded in 1966 and they would repeat the feat three years later.

After beating defending champions Kerry in the semi-finals, Kildare, managed by Mick O’Dwyer, came into the contest as heavy favourites to win their first title since 1928 but found the Tribesmen’s third quarter rally too much to handle.

On this date in 1998, Galway won the All-Ireland SFC title for the first time in 32 years, defeating Kildare in the final, 1-14 to 1-10.#20YearsSinceSunday pic.twitter.com/9oLlaVpmcW

The Lilywhites also defeated Dublin and Meath (the 1995 and 1996 champions) while Galway needed extra-time following a replay to beat Roscommon in the Connacht Final.  But their five-point win over Derry in the semi-final showed John O’Mahony’s team weren’t just making up the numbers.

Dermot Earley’s goal allowed the Leinster champions take a 1-5 to 0-5 interval advantage but the momentum swung after the restart.  Jarlath Fallon tallied a point before Padraic Joyce struck a wonderful goal as they outscored Kildare 1-6 to 0-1 in 15 minutes.

Kildare reduced arrears but when Sean Og De Paor stepped up for the final point in injury time, Galway’s (and Connacht’s) slumber was over as Sam Maguire crossed the River Shannon for the first time in 32 years.