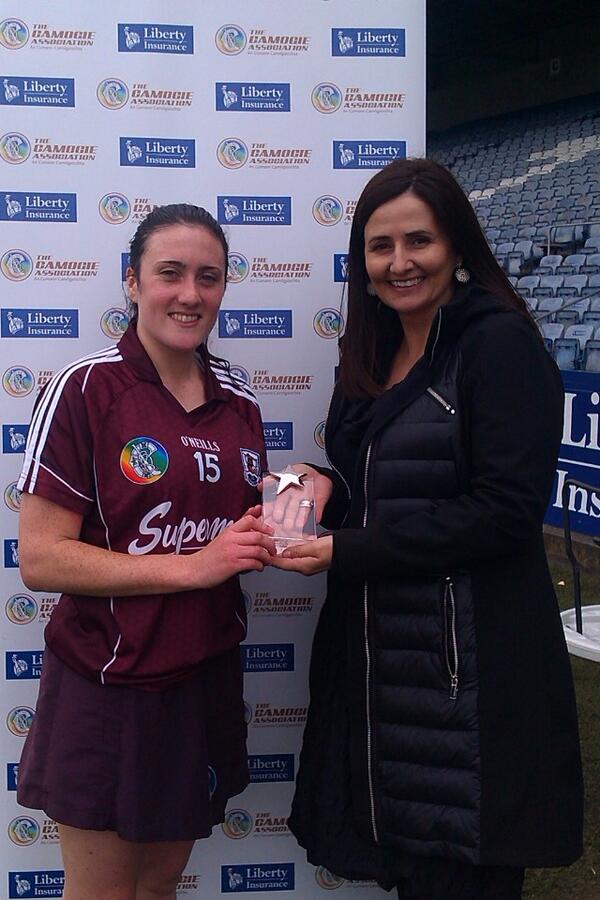 Galway survived this battle today to book their place in the league semi-final as Wexford pushed for a saving goal in the dying moments.

The Tribeswomen looked home and dry leading 2-15 to 3-8 with three minutes remaining before Una Leacy’s second goal put Wexford back in touch.

And in injury time, the Slaneysiders tested the resolved of Galway’s rearguard as Joanne Dillon was denied on two occasions by Sarah Dervan and Caitriona Daly, Stacey Kehoe’s one effort wide and Leacy had the ball in the net only for referee Eamon Cassidy to have already blown for an injured player.

Galway came in as favourites but have always been tested by Wexford and this was no different.  Martin Carey’s team looked to capitalise on defensive errors and reaped the benefits in the opening 10 minutes.

Linda Bolger opened with a 45 before Rebecca Hennelly equalised.  But when Galway didn’t clear their lines on five minutes, Aoife Guiney’s ground stroke found the net and Wexford led 1-1 to 0-1.

However, Galway replied with four scores in three minutes through Caitriona Cormican, Aoife Donohue and Hennelly (2). But they were caught out again in the 10th minute when Leacy took a cross field ball before shaking off Dervan and hand passing to the net.

Emma Walsh put Wexford 2-2 to 0-5 ahead but Hennelly was having a major first half influence and two points from play (including one from 70 yards) reduced arrears the minimum before Bolger and Shelly Kehoe replied.

Again, a Hennelly brace had Galway in touch but when Cormican’s shot was blocked by Dearbhla Doyle on 27 minutes, O’Reilly pounced and got the major and they went in 1-10 to 2-4 ahead following another Hennelly score.

Shelly Kehoe was starting to dominate around the middle and she added two early minors after the restart before Guiney’s run from the left resulted in Wexford’s third goal before Una Sinnott made it 3-7 to 1-11.

Ciara Murphy pointed for Galway but they were back ahead when Niamh Hanniffy shrugged off Shauna Sinnott before finding O’Reilly for the second goal on 40 minutes.

Donohue and Hennelly (2) stretched the Tribeswomen’s advantage to four before Joanne Dillon stopped Wexford’s rot.  But when O’Reilly took Finola Keely’s pass for a 2-15 to 3-8 lead with three minutes remaining, Galway looked to have finally gotten the job done.

But Leacy’s second green flag ensured a nervous end even if Hennelly did split the posts.  Galway survived and got a badly needed test and more lessons to learn before they face Kilkenny in two weeks.