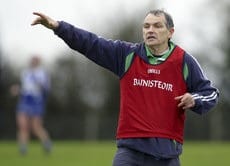 Michael 'Hopper' McGrath…. a couple of all stars, couple of club and two county all Ireland's in the pocket. Savage hurler back in the day pic.twitter.com/FwTOwZVBGm

Michael ‘Hopper’ McGrath won four All-Ireland hurling titles with Sarsfields and Galway and has overseen the club’s camogie team for the last three years.  He chatted with Galway Daily ahead of Sunday’s game.

“It’s only a few days away and it’s on top of us,” said the two-time All-Star.  “I know the five-week gap is a fair gap.  You’d think at the time it’s a long way off but we’re nearly here alright.

“That’s just a coincidence but it’s nice to be back in a final again.  We’d a tough year of it.  It wasn’t easy.  We’d a lot of tight matches.  But we’re here now and we’ll have another go at it.

“They were both games that could have gone either way.  If you go back to the (St.) Thomas match, I think at one stage in the second half we were four or five points down and came back and dug out a result.  We won by two for a finish.

“And the Burgess (Duharra) match the last day, 10 minutes to go to half-time and we were playing with a storm, we were three down and came back and levelled it at half-time.

“And at half-time, probably you wouldn’t have given a lot for us but we just dug it out.  And it was a great sign of them that they just stayed at it without doing spectacular and got the result.”