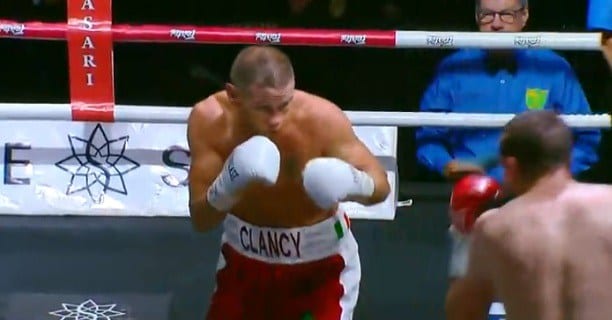 ‘The Galway Assassin’ won all eight rounds from all three judges picking up a 80-72 unanimous points decision across the board.  The result means he is now a two-time champion down under after winning the lightweight title in 2015.

Coming in to the Wolfe Tones ‘Celtic Symphony,’ Clancy looked in control from the bell delivering one-two combinations to keep his opponent at bay.  There was never any doubt about the result when the judges’ verdicts were announced.

The fight took place in The Star Event Centre in Sydney and Clancy came to the ring just before 4am Irish time.  On a card named ‘The Fighting Irish,’ Blanchardstown’s Darragh Foley won the WBA regional unification main event bout and putting himself in contention for a World title fight.

But Clancy, who missed out on an Irish title fight against Paul Hyland two years ago, was the top story for Galway supporters.  The two-time New South Wales Champion has set up St. Patrick’s Weekend for the west before three Galway teams brace Croke Park in search of more honours.