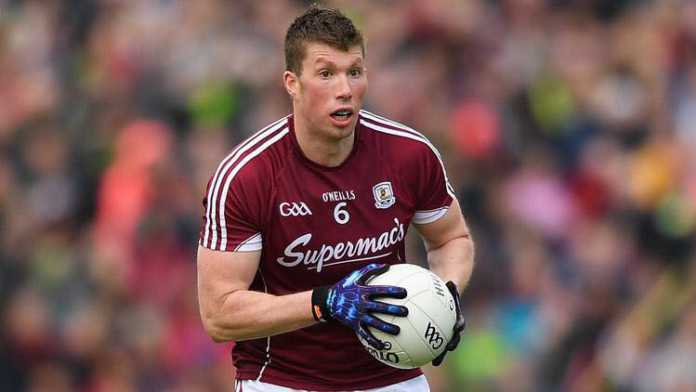 Galway’s Gareth Bradshaw has announced that he is retiring from inter-county football after 14 years with the Galway senior team.

The 33 year old Moycullen man first played for Galway at a senior level in the NFL in 2007.

The following year was his first GAA Championship, where he had his debut game against Roscommon in the first round of the Connacht SFC.

Galway Senior Football Manager Padraic Joyce, said that Gareth is an “outstanding footballer” who has always given everything for Moycullen and the County.

“He sacrificed all he could in getting his body fit for the challenges year in year out. Having managed him last year I could still see that he was working harder than ever to help Galway Football.

“He always put the team first. We will miss his presence and personality from the Galway set up.”

On top of playing for Galway, Bradshaw also plays for Moycullen, and was on the team that won the club’s first ever County Senior Football title this year, after defeating Mountbellew-Moylough.

Joyce thanked Bradshaw on behalf of everyone involved in the Galway Senior Football team for his years of commitment, and wish him well in defending that title next year.

“After taking the time to consider my future since the end of the 2020 inter-county season, I have now decided to retire from playing football for Galway. It’s been an absolute privilege to represent the county’s flagship football team for 14 years, an honour which I never took for granted.”

“I would like to express my gratitude to many, in particular my parents and family, my partner Sarah-Jane, my club Cumann Peile Mhaigh Cuilinn and my former secondary school St. Mary’s College, all of whom have always supported and encouraged me to pursue my dream of wearing the maroon and white.”

“I would also like to thank all those who enabled my inter-county career to last for as long as it did, there are too many to name individually but you know who you are and I will always be truly grateful for your help and support.”

“To Padraic, I would like to thank you for the opportunity and support that you gave me over the last twelve months in what was an unprecedented year in 2020 and I wish you and the team the very best going forward.”

“Furthermore, I would also like to thank all the previous managers whom I played under who entrusted me with the Galway jersey.”

“Lastly, but by no means least, I would like to pay tribute to every one of my Galway teammates, both past and present. It was always a pleasure to play alongside you and I wish you all the very best for the future.”