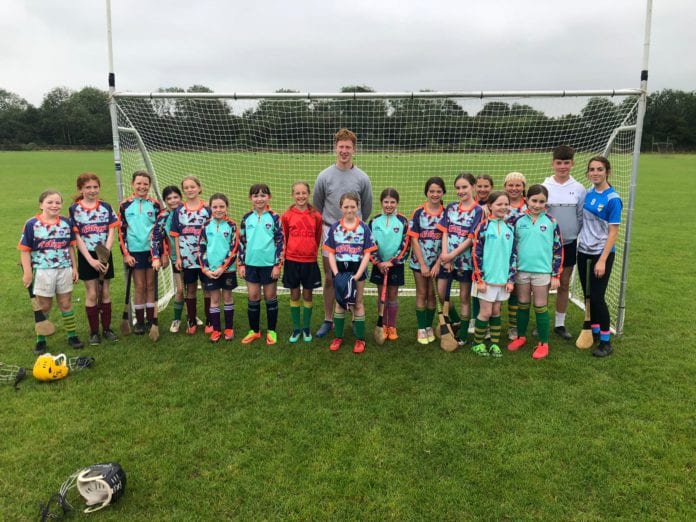 Hundreds of children got the chance for some summer fun that’s been sorely lacking this year at the Cúl Camps organised by Craughwell GAA club.

Over two weeks last month, 290 kids aged between 6 and 14 took part in the Cúl Camps organised by Craughwell GAA.

The first week was dedicated to the older kids, aged 10 to 14, and the second was for younger participants who were 6 to 9 years old.

Wrangling that many kids took a lot of adult supervision, with up to 32 coaches participating in the event at its peak, along with a dedicated team of volunteers to pull it all together.

Going ahead with the Cúl Camps was a “mammoth” undertaking in the current circumstances, the club has said.

“When the decision had to be made about holding the camp in light of the current Covid-19 pandemic, a lot of clubs chose not to do it.”

“As a club, though, we decided to hold the camp, breaking up the attendance into two weeks so that every local child could do it. Once we decided to go ahead, we put the plan in place.”

There were 20 coaches involved in the first week of the camp for the older kids, but that number was increased to 32 in week two, where there was then a coach available for every five kids.

This allowed Craughwell GAA to put on “more intensive sessions” and generally two provide more flexibility with the organisation.

The Cúl Camp went off almost entirely without a hitch, with the only thing interrupting the 10 day event being an Orange Weather Warning, that forced them to come in off the pitch for one day.

This would not have been possible without the “dedicated and interested” people who helped to bring it all together, the club said.

“A big thanks to Mark Monaghan for being head coach and co-ordinating every day. To Kevin Quirke for pushing to do the camp and laying out the framework for the two weeks.”

“Also a big thank you to: Anne Quirke and Brian Morrissey for being there every day doing toilets, registration, First Aid, and some coaching; Shane Comer who helped with the car parking on Week 2; Linda O’Hea who helped with registration and other parents who gave up a day to help out; and Joe Ryan for doing such a super job organising the payments.”

“In addition, a sincere word of thanks to the 32 coaches, without whom there would have been no camp. They were exemplary and the feedback was so positive. As a parish we showed them what a can-do attitude can achieve.”

“Finally, the club would also like to thank Brian Hanley, David Huban, Denis Carr, Damien Curley, and Damien Coleman for all their help and guidance. The Cúl Camps have been one of the highlights in the local Craughwell GAA year in 2020.”

Two Galway women shortlisted for Camogie Player of the Year