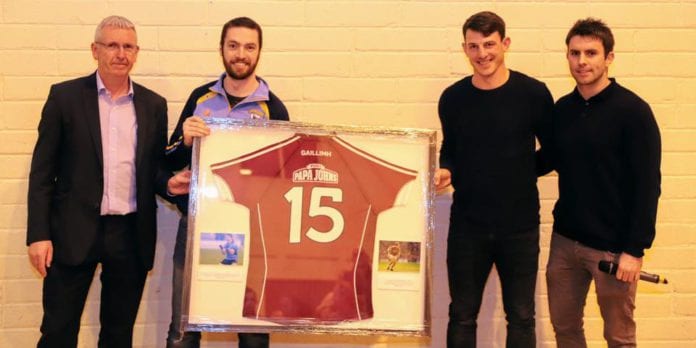 Salthill/Knocknacarra’s Sean Armstrong has received a special presentation from his club to mark his retirement from the Galway senior team in 2018.

The attacker, who’d previously retired in 2014, ended his involvement with the Tribesmen after their All-Ireland semi-final defeat to Dublin in August.

Armstrong was a key contributor in Galway reaching the National League Final and winning the Connacht title and the 32-year-old was a prominent player since his arrival on the inter county scene in 2005.

He played a key part of Galway’s under 21 All-Ireland victory in 2005 establishing a lethal partnership with Michael Meehan where they shared 6-3 in a 6-5 to 4-6 victory over Down.

And as well as winning three Connacht senior titles in 2005, 2008 and 2018, Armstrong was involved with Salthill/Knocknacarra’s county title successes in 2005 and 2012.

His greatest day was probably St. Patrick’s Day in 2006 when he helped Salthill/Knockncarra beat Antrim’s St. Gall’s 0-7 to 0-6 to win the All-Ireland championship.  Armstrong contributed one-point in a tight affair.

And his commitment to the club will continue as the centre forward kicked three points on Sunday (21st October) in the 2018 county semi-final but they came up short losing out 1-13 to 1-10 to Mountbellew/Moylough.

“To all the managers, backroom staff, players and fans,” said Armstrong on social media in September 2018 upon announcing his retirement.  “It has been a privilege to play for you and alongside you.

“To my family and friends, thank you for your absolute support. It was an honour to wear the maroon and white.”