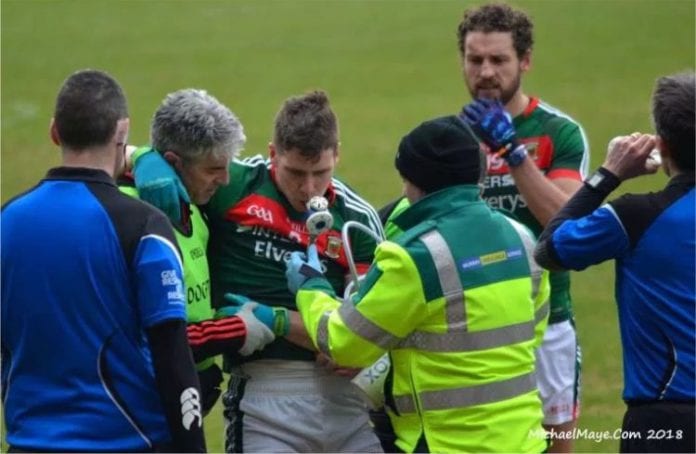 The full effects of Mayo’s National League hammering to Tyrone last week are been felt in the camp this week as news emerged that former Footballer of the Year Lee Keegan is set to miss the Connacht championship meeting with Galway in MacHale Park on May 13th.

Keegan dislocated his left shoulder after a challenge from Padraig McNulty in their 2-14 to 0-8 loss to the Red Hands.  McNulty received a red card for his actions that has put Keegan’s season in jeopardy.

His MRI scan suggested his rehab recovery programme will take at least eight weeks meaning it will be touch and go to see if Keegan can line out against Galway.  The injury occurred exactly eight weeks before they face the Tribesmen.

It wasn’t the only major knock Stephen Rochford’s men got as captain Cillian O’Connor also went off with a torn hamstring but he should be back inside six weeks and will lead Mayo against Galway in Castlebar.

However, Mayo’s status as a Division One team may be over beforehand as both players will miss this Sunday’s crucial game against Donegal in Ballybofey (3pm).

The Connacht outfit have been ever present in the top flight since 1997, longer than Dublin or Kerry, but should they lose to Declan Bonner’s men, they will ply their trade in Division Two next year.

#AllianzLeagues Division 1 Football Table after all of this weekend's Round 6 fixtures.

Galway and Dublin qualify for the final. Comhghairdeas.

Along with Keegan and O’Connor, Mayo are also missing Brendan Harrison and Donie Vaughan.  But Chris Barrett is set to return after playing for Belmullet last weekend.  And Andy Moran won’t face further action after his black card for remonstrating with referee Maurice Deegan against Tyrone.

Mayo’s year will be judged on championship fare and their clash against Galway is crucial.  But Division One status is also paramount meaning Rochford’s team face a critical two months.