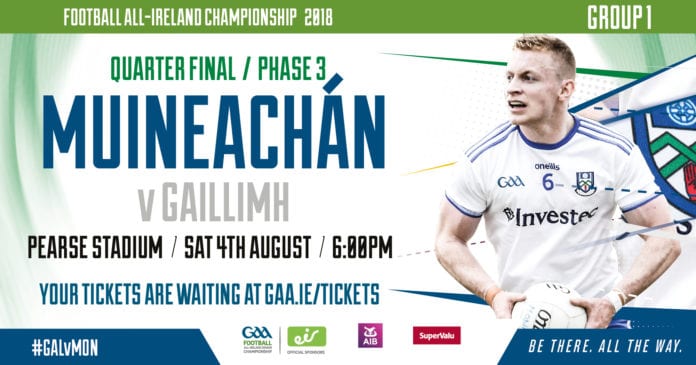 While Galway and Monaghan haven’t met in the championship since 1938 (Micheal O’Hehir’s first commentary), they are familiar foes during the spring, regularly clashing in the National Football League.

They have met five times since 2010 and the head-to-head count is close.  Galway have been successful three times (including their 2018 league meeting in Pearse Stadium) while Monaghan have prevailed twice.

We look back at the last five meetings between the counties:

This proved a critical contest in the battle to avoid relegation from Division One.  Indeed, Galway’s victory kept them in the top flight as defeat would have seem them drop.  Monaghan also survived that season but only on points scored as their scoring difference (-11) was the same as Derry.

Galway 1-20 1-14 Monaghan: Galway get their first points under Joe Kernan by beating Monaghan at Salt… http://bit.ly/rskmi From BBC sport

A Division One season opener on a disappointing campaign for both counties as they were the two relegated to the second tier.  Monaghan finished with four points but lost out to Armagh on the head-to-head.  Had Galway repeated the previous year’s win, they would have survived.

Monaghan has seven league debutants but they pulled away in the second half.  Finlay got six points, McManus scored five with Dick Clerkin, Mark Downey and Christopher McGuinness getting two each.

Gareth Bradshaw featured for Galway.  Armstrong was their top scorer while Eddie Hoare, Cormac Bane and Matthew Clancy got two points each.

An inexperienced Monaghan side caused an upset by beating Galway by 0-19 to 0-14 in Division 1 of the Allianz League. http://gaa.ie/e7223f

As a result of both teams dropping, they met again the following year, this time in Division Two.  Hard to believe now but Monaghan were in free fall for a few seasons and ended up the campaign with another relegation.

Galway were back in Inniskeen but kept their promotion push alive thanks to Michael Boyle and Gary O’Donnell setting up Danny Cummins in the 73rd minute.  Man of the match Conroy kicked six points, Padraic Joyce raised three white flags while Mark Hehir chipped in with a brace.

Finlay was again the key Monaghan target man with six points converted over the hour with Darren Hughes chipping in with four.  Bradshaw and Tom Flynn featured for Galway.

Fortunes were completely different two years later with Monaghan back on the rise and Galway going through a low ebb.  After being promoted at the first attempt, the Farney men were chasing back-to-back rises against the Tribesmen who were flirting too close to the drop.

Finlay kicked the winner to restore Monaghan to the top flight and leave Galway sweating on other results before being assured of their faith.  Finlay was a substitute before registering two points; McManus was their top scorer with three.

Michael Martin was top with three Galway points while Armstrong contributed two but also finished with 14 men after keeper Thomas Healy was dismissed.  A very different side to the current wearers of maroon and white but Bradshaw, Flynn and Conroy were involved.

Monaghan 0-13 0-12 Galway: Monaghan clinch Division 1 promotion with victory over a Galway side who remain in … http://t.co/0vda2jL8co

The dress rehearsal for the upcoming championship battle had both teams chasing a final spot entering the final three rounds.  A strong Armstrong substitute performance maintained Galway’s unbeaten run and put them into the National League Final in Croke Park.

A much more familiar team to what we’re used to now, only the injured midfielders Conroy and Ciaran Duggan can be ruled out for the next showdown.  Barry McHugh got five points, Damien Comer three while Johnny Heaney, Adrian Varley and Conroy scored two each.

Kieran Hughes did best for Monaghan with 1-3, McManus added four points and Jack McCarron was on hand for a couple as the Ulster side missed out on the decider.