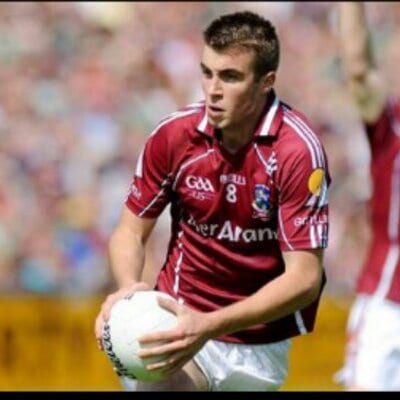 Galway senior Paul Conroy was the special guest and presented the medals to the two winning Galway football teams who won the Tedd Webb Cup and Shield in September 2018.

The ‘City and West’ team, captained by St. James’ Daniel McNulty, were the overall winners taking the cup competition by 1-13 to 1-8 against Mayo East/West.  Despite conceding an early goal, the Tribeswomen led 0-7 to 1-1 at the break and a second half major ensured their success.

And it capped off a double against their rivals as Galway North were comprehensive winners in the Shield Final beating Mayo East/West by 3-10 to 0-9.  The team, captained by Monivea/Abbey’s Keith Reilly, struck early to lead 1-5 to 0-5 at half-time.

The Connacht GAA Ted Webb Inter-County U16 Football Competition has been played in Connacht every year since 1976, in memory of former Mayo and Ballyhaunis Player, Ted Webb.

Great evening and crowd in @Galway_GAA Loughgeorge for the presentation of the @ConnachtGAA Ted Webb medals to our two winning teams. Thanks to @feedthepulse for the food and @PaulC225 for presenting the medals. @AoifeNiChonaill @TribesmenGAA pic.twitter.com/jSPmLkTRNL