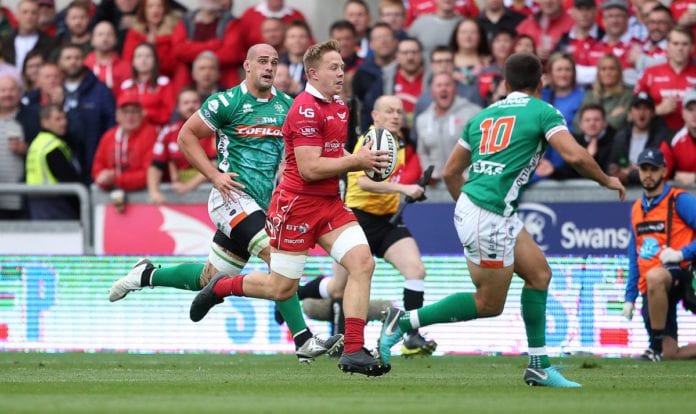 The Month of Champions continues this Saturday when 2016/17 champions and last year’s finalists Scarlets pay a visit to the Sportsground for another massive game in the Guinness PRO14.

With both sides looking to play free flowing attacking rugby where possible, it promises to be a hugely exciting occasion for the fans. Here’s all you need to know about the tie.

How have Scarlets fared in the Guinness PRO14 so far?

Scarlets began their campaign in Kingspan Stadium when a late penalty by former Connacht player John Cooney secured a 15-13 win for Ulster. They picked up their first win of the campaign a week later with a 23-21 win over Leinster in a repeat of last year’s final.

They then made it back-to-back wins, overcoming Benetton Treviso 38-29 at Pairc y Scarlets. Those results leaves them sitting in 3rd place in Conference B.

How’s our recent record against them?

It’s almost a year to the day since our last meeting – coming on 29th September 2017 when Scarlets were the victors 36-27, while they also picked up wins both times we met in the 2016/17 season. Our last victory over the Welsh side came in January 2016 when we were 30-17 winners.

Who are the players to look out for?

Scarlets lined out against Treviso with the likes of Welsh internationals Leigh Halfpenny, Gareth Davies and Ken Owens in the side. It’s unsure yet whether centre Jonathan Davies, who has missed almost a year through injury, will be back in time for the game.

When will the team be announced?

The team will be announced at midday on Friday on the Connacht Rugby social media channels.

Where can I buy tickets?

Tickets are on sale now at connachtrugby.ie/tickets. Please note there is limited availability remaining for the main terrace so you need to act fast!

Anything else I should know?

At half-time the victorious Connacht U18 Boys and Girls teams will take to the field after their successful interprovincial campaigns. It’s the first time in Connacht’s history that interpro titles have been won by both male and female teams in the same year, so make sure you give the squads the reception they deserve!