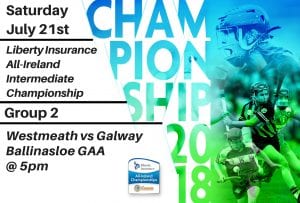 Galway qualified for the All-Ireland intermediate camogie semi-finals as the edged past Westmeath by one point to book a final four place along with Tipperary.

The Premier County’s victory over Kilkenny meant they advanced with the Tribeswomen along with Cork and will fight it out for top spot in Group 2 on August Bank Holiday weekend.

It was the third time Noel Finn’s charges squeezed crucial points from narrow games.  Late goals got them a win and a draw against Antrim and Tipperary.  But they always led this time even if it was tight at the finish.

Megan Dowdall got Westmeath off the mark in the opening minute before Rachel Monaghan equalised.  And the Mullagh corner forward added another before Tara Ruttledge made a fourth minute breakthrough getting the home team’s goal and they led 1-2 to 0-1.

It was an advantage Galway never surrendered.  Pamela Greville hit back with two Westmeath points but even though she added four more scores and Ciara O’Looney also tallied, they couldn’t get on par with their neighbours.

Monaghan, Elisha and Chloe Broderick contribute the remainder of Galway’s first half scores – the former sending over long range placed balls on their way to a 1-9 to 0-8 interval lead.

And she added another upon the restart before Westmeath enjoyed their best spell with three unanswered white flags.  Greville converted two frees either side of a Denise McGrath minor to leave them 1-10 to 0-11 in arrears on 37 minutes.

The teams traded points over the next 15 minutes with the visitors responding to Galway four times.  Monaghan sent over three frees with Amy Caulfield also on target.  Dowdall, Sheila McGrath and Greville shared the Westmeath response.

When captain Mairead McCormack troubled the umpires six minutes from time, Westmeath were only the bare minimum behind and needed to get a result to ensure their survival.

But Galway kept their composure which has served them will in the championship as Monaghan fended off four defenders before supplying Karen Kennedy who kept her cool to slot over the bar.

Greville replied in injury time leaving it 1-15 to 0-17 but Westmeath needed at least one more score.  However, after a Greville sideline was intercepted by Niamh Fox, referee Paul Ryan drew the game to a conclusion.  And Galway were in their first semi-final since winning the Jack McGrath Cup in 2013.

Galway meet Kilkenny in their last round-robin fixture of the 2018 Liberty Insurance All-Ireland intermediate camogie championship on Saturday, 4th August.  The maroon and white will be at home with a time and venue yet to be decided.