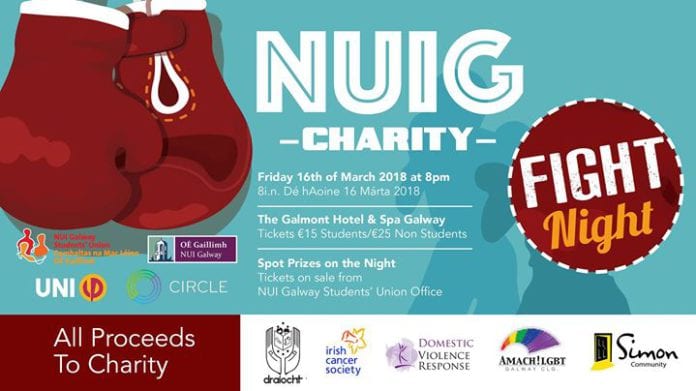 NUI Galway Cancer Society and their Students’ Union have lined up a night of white collar boxing in the Galmont Hotel this Friday evening, March 16th.

The event will raise money for various charities and 24 students will be action along with two fights hosted by the NUIG Muay Thai club.

This comes off the back of a successful grudge fight night against GMIT last November and was originally meant to be against Maynooth but they had to withdraw.  That being said, NUIG students will take to the ring with all boxing participants involved having no previous fighting experience.

“Whatever way the dates were falling with availability in the Galmont there was no night that would suit both colleges really,” said co-event organiser Sean O’Dea to the SIN, the college’s online student newspaper.  “So, Maynooth were like ‘look we don’t want to half commit to it.”

The bell for Round Two rings for Galway as charity boxing returns despite Maynooth withdrawal #boxing #sport https://t.co/UH9LsrYWjB pic.twitter.com/VBQ7ujGBux

The fighters will have trained for five weeks under the supervision of experienced coach Oughterard’s Stephen Molloy who is the father of Kieran Molloy, the newly crowned National Elite Champion.

“You would be surprised,” added O’Dea.  “People come along very quickly. It takes a while for things to click, but by week four or five everything starts clicking into place and you can really see huge improvement.”

“Everyone really enjoyed the experience last time though so I don’t think there was any regrets thankfully”.

The NUI Galway Charity Fight Night will take place at 8pm on March 16th and tickets can be bought from the NUI Galway Students Union office for €15 for students, and €25 for non – students.