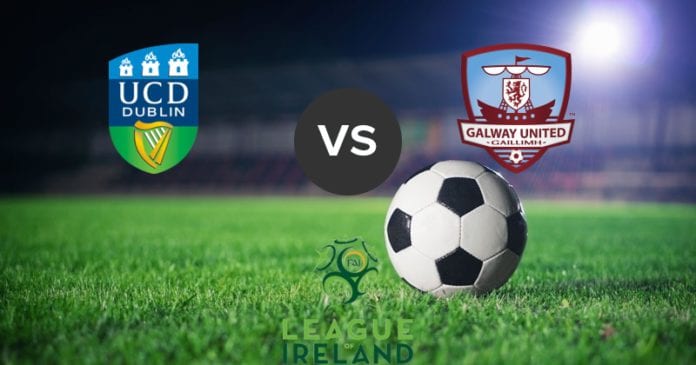 The bad weather that caused a complete wipe out of games last weekend makes this round of Airtricity League First Division games feel like a season restart as Galway United head to the capital.

That being said, both teams came through their openers with wins and will be considered among the favourites for the title.  And this joust will allow momentum shift in one side’s direction.

Galway United, while riding their luck on occasions, made no mistake in their 4-1 win over Athlone Town two weeks ago.  Danny Furlong marked his debut with a hat-trick and Roann Manning chipped in with his first ever Galway goal before they conceded a late consolation strike.

However, UCD would have taken a major lift from their opening tie as they came back from behind to beat Shelbourne 2-1.  Gregory Slogett and Timmy Molloy go the goals for Collie O’Neill’s team reminding pundits of their credentials.

Galway United, Shelbourne, Longford Town and Finn Harps were discussed as the promotion favourites during the close season but UCD finished third place in 2017 and also included the league’s top scorer Georgie Kelly.

They’ve held the majority of their panel from last year with Niall Corbet the most notable absentee.  But they still possess a strong spine.  Slogett and Gary O’Neill form a solid midfield alliance; Maxim Kouogun will lead the defence with Kelly in attack; and Molloy and Dan Tobin are other experience performers.

Galway made radical changes to their squad following their relegation from the top flight but do possess strength in depth that manager Shane Keegan will hope benefits their challenge over the year.

Mark Ludden has new defensive partners but played his part in the win over Athlone Town; Stephen Walsh’s pass statistics were top drawer (95%); and Furlong took his chances.

Eoin McCormack, Alex Byrne and Robbie Williams are available for selection after minor injuries but Conor Melody, who has returned to light training, is still out with his knee problem.

The last time these teams met was in the 2014 promotion/relegation play-offs.  Galway United won 5-1 on aggregate with Gary Shanahan, Byrne and Ryan Manning scoring in the 3-0 win in Eamonn Deacy Park.

This will be one of United’s toughest assignments but also a chance to lay down a marker.  A victory is within their grasp but coming out with a point won’t be a bad reward.

📸 | Preparing for our first away trip of the season against @UCDAFC tomorrow.

Kick-off is at 7.45pm at the UCD Bowl. #GUFC pic.twitter.com/UlkkihM15G