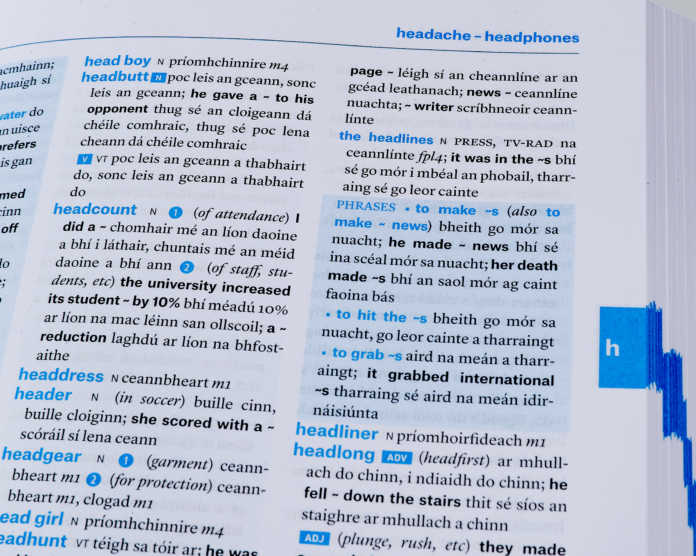 Among those in a attendance at the event will be household names such as Dara Ó Briain, Micheál Ó Muircheartaigh and Mary McAleese, as they share their grá for our national language.

Produced by Foras na Gaeilge, the dictionary is the first major English-Irish Dictionary to be published in over sixty years and contains contains 1,800 pages, 85,000 word senses and 1.8 million words in contemporary English and Irish.

The entries are derived from the hugely popular New English-Irish Dictionary website, www.focloir.ie, which attracts over two million visitors a year.

The aim of the dictionary project is to produce a comprehensive modern dictionary which would represent current usage not only in Irish but also in English as it is spoken in Ireland, the main dialects of contemporary Irish, and a broad range of language from the most technical to the most informal.

“This dictionary follows on in a proud tradition of Irish-language lexicography, including famous works by Niall Ó Dónaill, Tomás de Bhaldraithe and Pádraig Ó Duinnín.

“Dictionaries are critical tools for any language community. They allow communities to express themselves confidently and effectively in their own language, while also preserving the richness – the saibhreas – of a language.

“I congratulate Foras na Gaeilge, the dictionary team, and everyone who was involved in this historic achievement.”

To celebrate this milestone, Foras na Gaeilge are highlighting some of the newer and more interesting entries and translations, including some that have recently come to prominence during the coronavirus pandemic:

“The New English-Irish Dictionary brings Irish-language lexicography into the third millennium with its emphasis on currency in both Irish and English and its coverage of all levels of language use, from formal to informal and from written to spoken,” said Chief Editor Pádraig Ó Mianáin.

“The New English-Irish Dictionary has been online since 2013 and now attracts over 2 million users worldwide annually, with over a quarter of them from overseas.

“When the online version was completed, production of a printed version began. In order to produce a one-volume dictionary, over a third of the content in the online dictionary (which contains 48k entries and 145k word senses) had to be left out and the remaining content had to undergo significant editing and reformatting.

“We are delighted that the dictionary is now available, and to have this opportunity to launch it with the President today.”

The printed dictionary also contains a substantial Language and Grammar section with essays and tables covering topics such as style, translation and grammar information.

It is available in bookshops and online now with an RRP of €30.