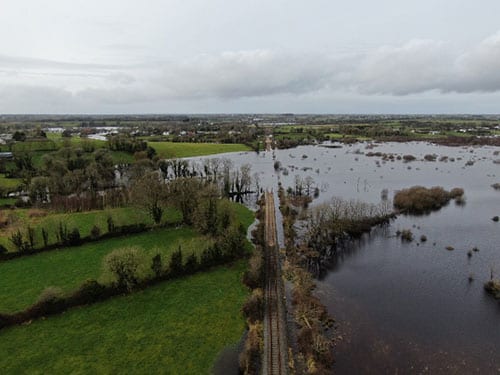 Proposals for the Gort Lowlands Flood Relief Scheme have advanced with the completion of a feasibility report that has identified a potentially viable scheme after more than two years and several delays.

Galway East TD Seán Canney has said that the county council has informed him that report has identified a scheme that is both environmentally acceptable and cost beneficial.

“This is great news for the many families who have suffered from flooding over many decades,” Canney said.

The Independent TD was one of those who first advanced an initiative for a flood relief scheme for south Galway in 2016, along with Deputy Denis Naughten, after heavy flooding the year before

Most recently, Gort was badly affected by flood waters in February of this year, with large areas of farmland left submerged for extended periods of time.

The Feasibility Study for the Scheme was commissioned by Galway County Council in 2018, with the first public consultations taking place in May of that year.

“Whilst there was a delay in finalising the report, it is gratifying that we now have a project with engineering solutions based on cost benefits,” Seán Canney said.

“I look forward to the project being brought forward to full design and construction. The people of Gort deserve a break from fear of being flooded. Now we have a solution”.

“I want to acknowledge the work of the Consultants, Galway County Council, Flood Action Group and G.S.I for their input.”

David Murray of the South Galway Flood Relief Scheme Committee also welcomed the news of the report’s completion, with a solution in mind.

“There is a viable solution to flooding in South Galway which means that an investment in a solution here will save money in the long term and bring an end to the devastating threat that has plagued our community for over sixty years.”

“There is a lot of work yet to be done and many challenges ahead before we realise the full solution and while we are now in unchartered territory, we have overcome the decades-long challenge of South Galway not being worth saving.”