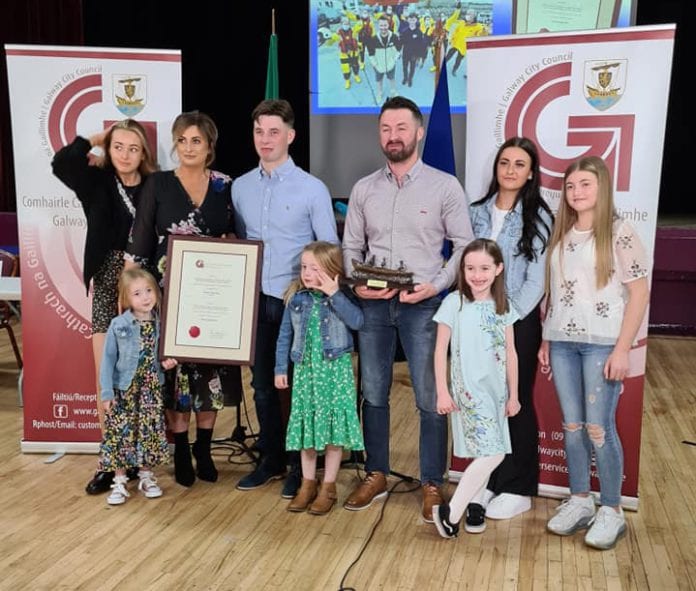 The father and son who rescued to young woman from the waters of Galway Bay after a 15 ordeal showed the “fantastic community spirit” in Galway Mayor Mike Cubbard said.

Claddagh fishermen Patrick and Morgan Oliver were honoured at a Mayor Reception held in Leisureland on Friday in recognition of their achievements.

The fishermen rescued Sara Feeney and Ellen Glynn from the water south west of Inis Oírr after a massive rescue operation in August.

The two young woman had been swept out to sea while paddle boarding at Furbo, and ended up being carried almost 20 miles, where they eventually tied their boards to a lobster pot to hold on overnight.

The Morgan’s used their knowledge of the waters in the are to estimate where the rides would have carried the two, and found them the following morning.

“The heroic actions of Patrick and Morgan Oliver have captured the imaginations of both the people of Galway and people across the nation at a time when good news is, unfortunately, less common,” Mike Cubbard said at the reception.

“This rescue, however, highlights the fantastic community spirit which exists in Galway as hundreds of people across the city and county offered their help with the search operation.”

Mayor Cubbard presented the two with a bronze model of a traditional Irish currach and a framed and signed presentation scroll.

A small presentation of All the Falling Stars jewellery was also made to Ellen Glynn and Sara Feeney in recognition of their bravery throughout the ordeal.