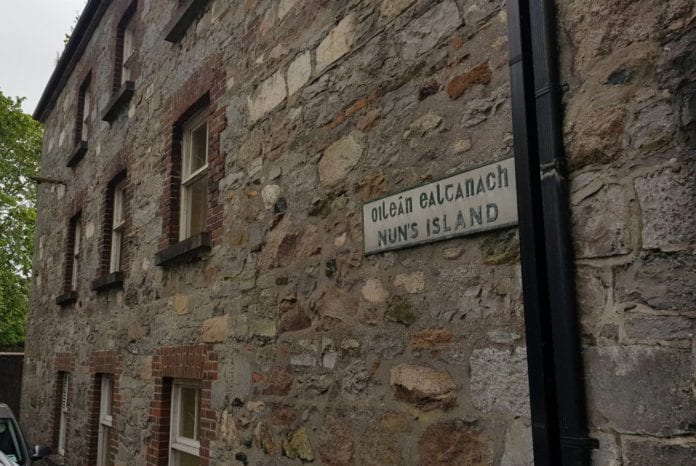 There is an ongoing proposal to create an Urban Gaeltacht in Nuns’ Island in order to cultivate a “thriving Irish language community” in the centre of Galway.

The proposal calls for Galway’s Language Plan to be “implemented in earnest” with NUIG fulfilling its obligations to utilize public lands to promote and provide for Irish bilingualism.

Under the university’s language scheme it has a duty to teach through the medium of Irish, serve the Gaeltacht and Irish language community, and to create an expressly bilingual campus.

NUIG maintains that the Urban Gaeltacht is the way to meet this commitment by developing public lands with this express goal in mind.

This designated space would create Irish-speaking cluster inside the city where daily use of Irish would be at the same level as other Gaeltachts.

The proposal will call upon the City and University to deliver Gaelscoileanna education from primary through secondary.

The long term ambition of the Urban Gaeltacht is to see a professional Irish speaking class in Galway City.

The proposal states that this ambition can be fulfilled through the provision of short-term leases, starting out at incentivization pricing.

It’s often complained that recent highly skilled graduates are not in a position to live in Galway city centre during their early years in the workforce due to price-out pressures.

The proposal aims to remedy this through the subsidization of rents which can be be tied to salary as wages increase over time until people can meet market prices.

Candidates for this scheme will be required to demonstrate professional training (technology sector especially) and Irish language tested fluency.

It is anticipated that rental payments can increase with salary while “non-achieving occupants” would be replaced with new applicants as leases expire.

The cultural contribution will seek to highlight Galway’s specific contribution to Irish literature with a new facility “to tell the story of writing Irish & English in Ireland”.

This Literature Museum would organise exhibitions, lunchtime theatre and readings along with a special room devoted to children’s literature.

It is hoped that the Galway Literature Museum would become an important cultural attraction for people who want to “discover, explore or simply enjoy Galway’s immense literary heritage”.

The Urban Gaeltacht will also look to facilitate a live-work community in Galway that accommodates candidates with key skills in Irish language & technology.

It is anticipated that skilled tech graduates and companies from the Irish language community will concentrate Irish entrepreneurs in an “informal network of buildings and offices to become a virtual campus of innovation within Galway”.

The tech hub would be constructed by facilitating and renovating the existing architecture of Nun’s Island which would cater to “innovative entrepreneurs” within the Irish language community.

Plans to transform the underutilised Nuns Island have been ongoing since NUIG announced its intentions earlier this year.

Last week, Galway City Council was treated to a report consisting of different ideas for the development of the parcel of land.

The City council was informed that there has been an ongoing consultation with residents, property owners and the local diocese in the area.

Fianna Fáil Councillor John Connolly asked about the possibility of an Urban Gaeltacht being implemented, saying that there is a need for people to have a space to speak Irish in the city.

This was supported by Social Democrats councillor Owen Hanley

Brian Saunders of NUIG informed the chamber that a presentation had been received regarding an Urban Gaeltacht and they are working on having it placed online to be considered alongside other proposals.

The Nuns’ Island master plan is set to be published this year which will give a clearer idea on what might be done with the area.