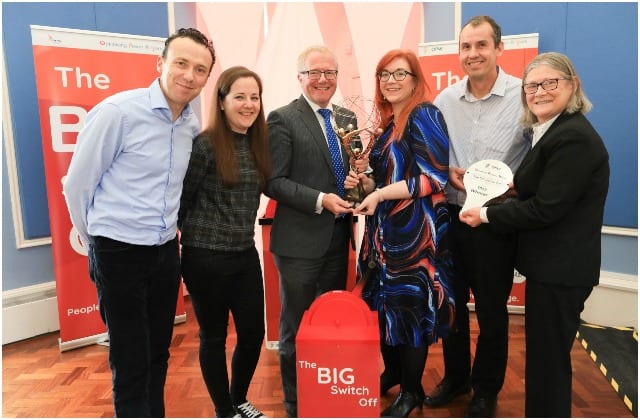 University Hospital Galway was named winner of the ‘BIG Switch Off’ competition which encourages energy saving in hospitals.

UHG win this energy saving award for a staff awareness campaign during the month of October and the reduction of energy consumption over the October bank holiday weekend last year.

The annual ‘BIG Switch Off’ competition is organised by the Office of Public Works in partnership with HSE Estates.

It aims to change the approach to energy usage and to conserve as much electrical and thermal energy as possible in participating hospitals during the October bank holiday.

At an event in Collins Barrack, Dublin on Wednesday 22 January, UHG was announced the winner.

Speaking about the win Ms Chris Kane, Hospital General Manager said that in the run up to the bank holiday a number of awareness events were held to encourage people to cut energy usage.

“The results for UHG were impressive with a 10% reduction in energy consumption over the October Bank Holiday weekend as a result of everyone making an extra effort to switch off non-essential equipment and lights.”

Marion Grady, Environmental and Waste Management Co-ordinator at UHG added, “We’re delighted to be named the National winners of ‘The BIG Switch Off’ competition.”

“The project has brought about real cultural and behavioural changes in the hospital with staff now approaching the Energy Team with ideas for other sustainability projects.”