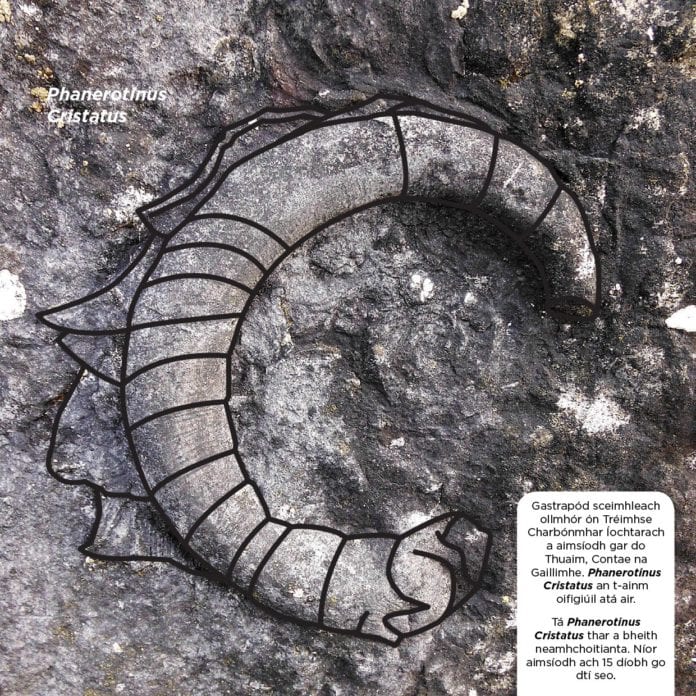 An extraordinary giant fossil in Tuam will be unveiled for the first time at a public exhibition in its hometown on Monday 30 September.

This very rare giant fossil dating from around 340 million years ago was spotted in a wall in Tuam by Galway based Chartered Surveyor and geological enthusiast Brendan Arrigan in 2017, and it was subsequently rescued for safe keeping.

The Tuam find is also special in having both pieces of the rock that was originally split by a stonemason to expose both the fossil itself and also the counterpart impression.

Worldwide, only 15 of these unusually large fossils have ever been discovered to date, and they are only to be found in a band of limestone stretching between Ireland and Britain.

Phanerotinus cristatus was a gigantic snail with spiny flanges around the outside.

It lived on the sea floor at a time when Ireland was situated close to the equator and covered by a warm tropical sea.

The ceremony will be open to the public and will include a welcome from Koen Verbruggen, Director of Geological Survey Ireland, short talks by Brendan Arrigan about finding and rescuing the fossil, and by Matthew Parkes, geological curator in the Natural History Museum, putting the find into the context of a Geological Heritage Audit of County Galway.

The fossil will be placed at Galway County Council Office, High Street, Tuam on public display in Tuam for a period of time and also at a branch of the National Museum of Ireland in Dublin.