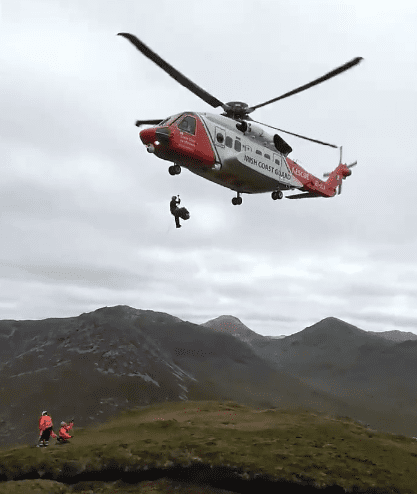 Three injured hikers have had to be airlifted from Connemara within a week of each other by the Coast Guard, with help from Galway Mountain Rescue

Two of the hikers were out on Diamond Hill in Connemara National Park, and the other was in the Gowlan area of Clifden.

The most recent was a French tourist who injured herself falling near the summit of Diamond Hill in the park yesterday afternoon.

Cleggan Coast Guard were first alerted to the incident shortly after 1pm by Malin Head Coast Guard Radio, and brought in Galway Mountain Rescue in case assistance was needed carrying her out.

They reached the woman at 2:30pm, but decided that it would be too dangerous to try and stretcher her to safety because of the steep ground.

Coast Guard helicopter Rescue 118 was called in and airlifted the woman from the hill, bringing her to Castlebar Hospital where she received treatment for non life threatening injuries.

The week before that on Wednesday August 15, Galway Mountain Rescue and Cleggan Coast Guard were called to a hiker with an injured leg, also on Diamond Hill.

That hiker was airlifted out by Rescue 118 helicopter.

The very next day, Cleggan Coast Guard were called to an injured hiker in the Gowlan area, where it was again decided that the ground was too treacherous to take them away on foot.

Rescue 115 extricated the hiker using the highline technique and choppered them to hospital for treatment.

Cleggan Coast Guard is a branch of the Irish Coast Guard that operates as a 24 hour emergency service that can be reached on emergency numbers 999 or 112.

The Coast Guard operates five rescue helicopters covering Ireland. Rescue 118 is based out of Sligo, and Rescue 115 operates from Shannon Airport.

Galway Mountain Rescue is a voluntary organisation whose members come from all walks of life, but share experience on the mountains.

They are one of 11 Mountain Rescue Teams in Ireland and work with An Garda Síochána and the Coast Guard on search and rescues in Galway and North Clare.