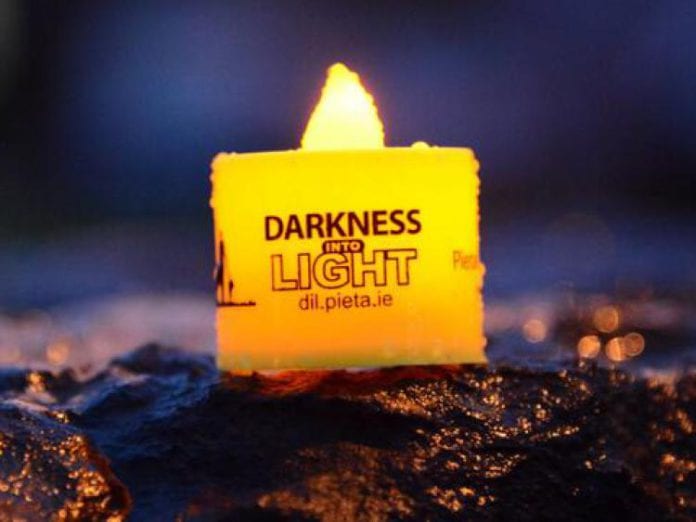 Thousands of people are expected to come out to Salthill on Saturday morning and walk or run from Darkness Into Light in support of Pieta House.

Darkness Into Light is a worldwide event that raises money for Pieta House to support their life saving counselling services for people struggling with depression and thoughts of self-harm.

Suicide and depression are issues which have touched almost everyone in Ireland, whether you have lost a friend or family member, or seen someone you care about suffering.

In order keep driving down the number of people who take their own lives and to help those struggling with issues of mental health we have to come out to show them they are not alone and support services like Pieta House that provide caring, professional help.

Joan Freeman, founder of Pieta House, started Darkness Into Light ten years ago and in the years since then it has grown beyond anyone’s wildest expectations, with events organised in cities and towns around Ireland and the world.

On the first night in Dublin, just 400 people set off from the Phoenix Park for a 5km walk, compared with last year where 200,000 people took part in 150 events in 16 different countries.

Nearly 10,000 people turned out for Darkness Into Light in Galway alone last year, with just under 5,000 registered ahead of time and thousands more coming out to join them on the sands.

This year looks to surpass that, with over 200 events being organised in multiple countries, roughly 180 of them taking place in Ireland.

Since 2013 Darkness Into Light has been sponsored by Electric Ireland.

Donna Burke, head of fundraising for Pieta House in Galway said that the event mirrors the help Pieta House gives to people, helping them find their way “from despair to hope”.

Pieta House offers a wide range of support services for people who are depressed or harming themselves, as well as the families, friends and wider communities of those bereaved by a suicide.

Darkness Into Light is Pieta House’s flagship fundraising effort, without which they would not be able to keep their support and intervention services free and easily accessible to people going through troubled times.

It costs roughly €1,000 to put someone through their intervention services according to Donna Burke, and they work to remove as many barriers as possible between people in need and the care for them, with no personal cost and no need for a GP’s referral.

Since opening its doors Pieta House has helped more than 40,000 people with face to face therapy.

On top of that the charity also has Suicide Bereavement Liaison Officers who work with families and friends who have lost someone over an extended period.

More recently, Pieta House has also been running its Resilience Academy aimed at 2nd Year Secondary School students to help teenagers cope with the stresses that have made depression and self-harm such a plague among young people.

Beyond just raising money, Darkness Into Light is about tackling that stigma around acknowledging mental illness which still lingers in Ireland “even around the language” Donna said.

She added that this event can be “such a soft introduction to the topic” to make people less uncomfortable talking about their own mental health.

Even if someone is still struggling to find their voice “When people see the amount of people that come out, they realise they’re not alone”.

These crowds who leave the comfort of their homes in the early hours of the morning are proof positive that people want to show their support for people struggling with depression and their families.

The event begins and ends at Leisureland in Salthill, with the walk/run starting at 4:15am on Saturday morning.

People taking part being advised to get down to Salthill 30 to 40 minutes early and give themselves time to find a place to park as roads along the route will close at 3:30am.

Galway walkers can register online at www.darknessintolight.ie, with 3,500 people registered in Galway as of Friday morning.

There’s still plenty of time for people to register before the event, or just come on down regardless and register on your phone while you’re there, or afterwards.

People don’t have to make their way into the city to show their support, with a total of 18 events taking place around Galway.