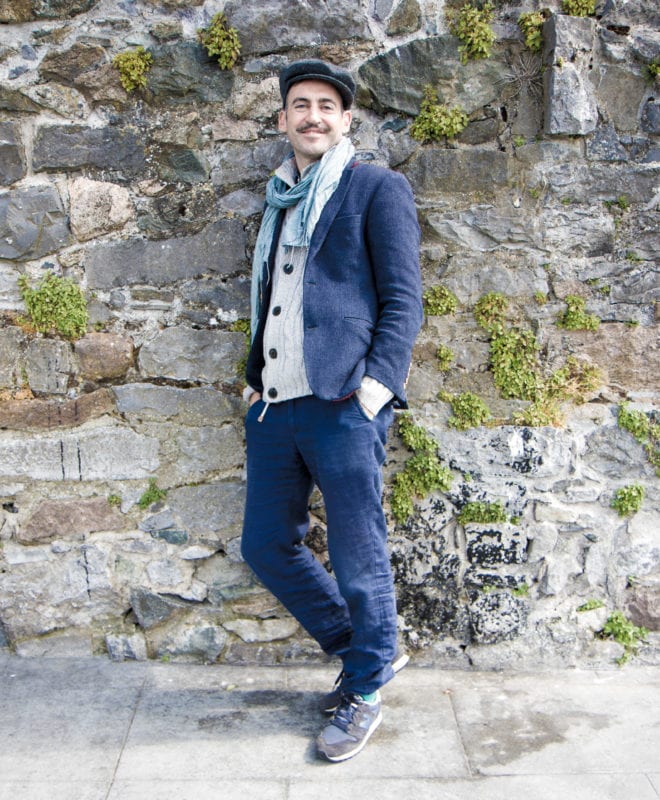 Galway might be the European Capital of Culture 2020, but Castlegar storyteller Aindrias de Staic is bringing some ceoil and craic, as Gaeilge, to the Dutch city of Leeuwarden this week.

Leeuwarden, in the province of Frieslands in the Netherlands, is the European Capital of Culture 2018 and this week they’re celebrating minority and endangered languages in the Living Room of Languages.

Aindrias is going to showcase Gaeilge to European audiences with music, song, and stories. That rich tradition of oral storytelling is one of the best things keeping Irish alive, and for Aindrias it’s the best way to show people the language:

“Irish is such a rich language, but because not everyone speaks it, I like to get the beauty and the magic across through actions, music, facial expressions and song,” he said.

“In Ireland, we’re famous for our storytelling – we really cherish it. It’s only recently, through a circuitous route, that we’re coming back to that and looking at how we can celebrate the language.

Embedded in Irish his whole life, going to a Gealscoil in Castlegar and with his strong connections to Mayo and the Aran Islands, Aindrias has seen Irish evolve. Even people who wouldn’t consider themselves everyday gaeilgeoirs use the odd word or two.

“There are so many beautiful words and expressions. Take the ‘craic’, for example – there isn’t really a word in English for the ‘craic’,” he points out. And he’s right, it’s not quite ‘fun’ or just ‘what’s happening’, it’s just ‘the craic’. You know what it means.

“It’s such an expressive language,” he continued. “If something is dirty it’s ‘salach’; if something isn’t nice it’s ‘ufásach’. Whereas if it’s nice it’s ‘go deas’, or ‘go brá’ – the sounds of the words reflect the meaning.”

The Living Room of Languages is organised by Afûk, the Dutch organisation responsible for promoting Frisian language and culture, for Capital of Culture 2018 in a week long event that encourages lesser known languages to strut their culture and history. And let everyone know they’re still alive.

Aside from Gaeilge, eight European languages that’ll be there include Upper Sorbian, Basque, Manx, Maltese, Galician, Cornish, Asturian, and Friulian.

Many of these languages are either endangered or else just aren’t all that well known or recorded. At least, not recorded coming from the mouth of someone that uses it daily. All the words might be documented, but ask Google Translate to put together a story for you and see what happens.

To get these languages, including Irish, put down on record the way they’re meant to be heard and spoken Afûk is partnering up with Wikitongues to record as many speakers as possible during the week long programme.

Getting to hear other tongues, the kind that aren’t common enough to make onto the Leaving Cert or an undergrad course, and swap notes is one of things Aindrias is looking forward to.

“So, I’m looking forward to taking part in the event – firstly to showcase our beautiful language, but also to hear the languages that resonate with Irish like Galicia, Basque, Welsh and Cornish, and to discover the beauty of all the other minority languages.”

Irish is one the three themes for Galway Capital of Culture 2020 along with Landscape and Migration, and will feature heavily in the programme of events.

As recently as last week at a special city council meeting on Galway 2020, councillors were adamant that the year had to have more than just people talking about Irish, we need to hear people speaking it.