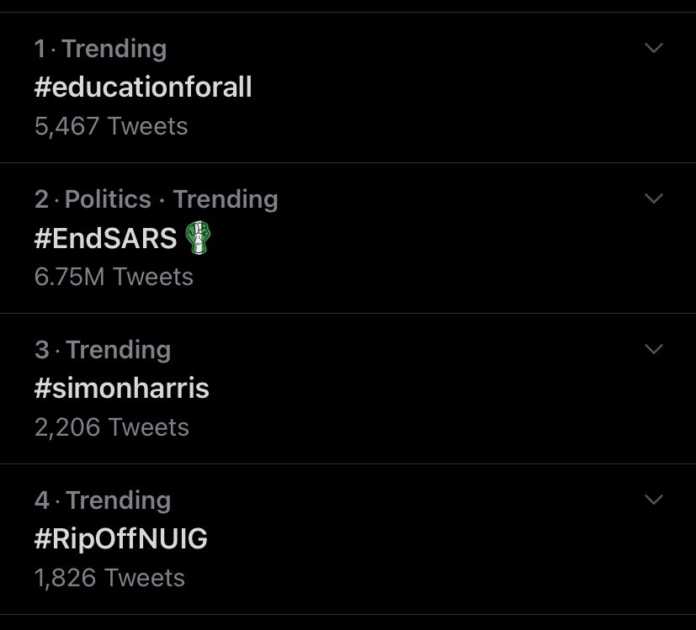 Minister Simon Harris’ Twitter mentions were bombarded last night when students from Galway and across the country took to the social media platform to call for ‘Education for All’.

Tweeting at Simon Harris, and using the hashtags #EducationForAll and #RIPOffNUIG, students called for a reduction in fees, higher thresholds for SUSI grants and investment in publicly owned accommodation.

One science student at NUI Galway said: “If the level of political activism shown tonight persists to a time where we can be active away from a screen then real change can and will happen.”

The movement began when Galway students decided to get the hashtags trending at 11pm when questions on third level education were being heard in the Dáil.

It quickly spread, with students from Universities and colleges across the country expressing their views and anger at the current situation.

“Tell Simon Harris we need to reduce fees, fix SUSI with higher thresholds with funding that reflects the new cost of education and invest in publicly owned accommodation with.”

Sinn Féin’s spokesperson for Higher and Further Education Rose Conway-Walsh thanked those who stayed up to watch the Dáil sitting.

“Thank you to all the students who stayed up late into the night watching my engagement with Minister Harris on student accommodation refunds, broadband, funding, fees & mental health supports. USI and SU officers are going above & beyond to support students on all these issues,” said the Mayo TD.

People Before Profit Galway also expressed their support for the students involved.

Last month, NUI Galway Students’ Union joined USI and NUS-USI in the launch of the Education for All campaign which called for immediate action on Higher Education funding.

The organisation that represents 374,000 students across the island of Ireland wrote an open letter to Minister Simon Harris asking him to take action on a number of key areas.

These include an end to the student contribution charge of €3,000 which is the highest in the EU, and a move toward publicly funded education at the heart of government policy.

It also called for a publicly financed student accommodation building strategy and charter for student tenant rights, and a reform of student supports across the island that match the cost of being a student in the new decade.

“We need our TD’s to take action on Higher education and not treat it as an afterthought,” she said,” said Emma Sweeney, Vice-President/Education Officer Of NUIG Students’ Union, last month.

“Every €1 invested in Higher Education delivers €4 to the wider economy. Galway is a student city and without our students the city will suffer hugely.”