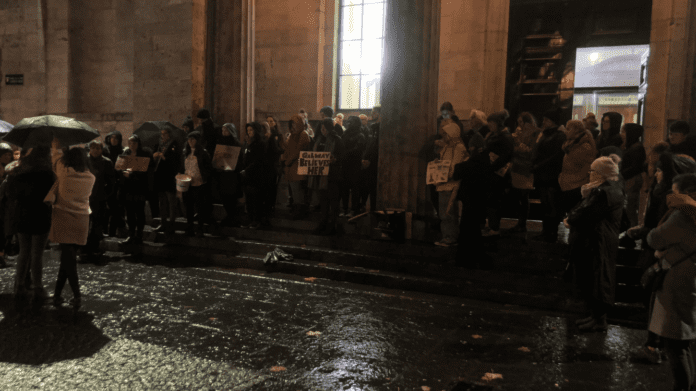 ‘Whatever I wear, Wherever I go, yes means yes and no means no’ was among the many chants bellowed out by a crowd of roughly 40 people outside the Galway Court House on Tuesday.

The protest was organised in response to a rape case in the Cork Central Criminal Court.

The jury subsequently found the Defendant not guilty.

Speaking first was Emma Lennon of People Before Profit who reiterated the defence barrister’s remarks to the crowd and then slammed them as not constituting any kind of evidence of consent.

Lorraine Grimes of the NUI Galway Feminist Society subsequently opened up her speech by chanting the phrase ‘the way we dress does not mean yes’.

She went on to state that just because someone happens to be wearing a thong doesn’t give someone entitlement to their body.

In addition, the activist blistered a legal system that victimizes women declaring the court system ‘implies that women are unreliable’.

The young NUI Galway student expressed her view that the court system not only disregards women’s rights completely but also doesn’t recognize women as equals.

She described the above case as another individual battle against a sexual perpetrator, in the war against rape culture, against the patriarchy, and against the victim blaming system which is in place.

She finished her speech with a final battle cry calling for victims to speak up and be strong even if ‘the f**ker walks free’.

Sharon Nolan of the Social Democrats was next to speak on the matter.

She immediately hit out at the ‘increasingly flawed approach’ the justice system employs for cases such as rape, sexual abuse and assault.

The activist referenced the fact that statistically, sexual assault was the most under reported crime with ‘over 80% of survivors’ never reporting their experience.

She then expressed her admiration for the bravery of assault victims who report their crimes, exposing themselves to the most ‘degrading and dehumanizing experience’ in court.

She declared it is in court you will be judged on what you wore and who you were with while the accused is not under the same level of scrutiny.

The activist highlighted her disapproval that the onus is on the survivor to prove that the incident happened ‘but not on the accused to prove that he got consent’.

The cross-examination procedure of complainants was criticised in cases such as rape and sexual assault which she said serve to re-traumatize the victims.

She also listed the ‘unacceptable actions’ which defence counsel’s routinely engage in, such as examining the complainants underwear and reviewing the sexual history of the complainant.

The final person to speak was Jessy Ni Cheallaigh of the party Solidarity. Jessy began by emphasizing the irrelevance of what a complainant happened to be wearing the night she was assaulted.

She labelled a the clothing of a victim as totally ‘irrelevant’ and ‘bizarre’.

Ni Cheallaigh described the ‘terrifying’ reality that there are people out there who still don’t understand this concept and alluded to a survey constructed by the EU which showed 9% of Irish people held the view that consent is not needed if a woman is dressed provocatively.

The Solidarity activist stated how this statistic reflected the rape culture prevalent in society which makes it the judiciary system in Ireland.

To conclude, Jessy Ni Cheallaigh advocated for a ‘special court system’ for victims of sexual violence and for solicitors/barristers to be fully trained to deal with these cases in a sensitive matter.