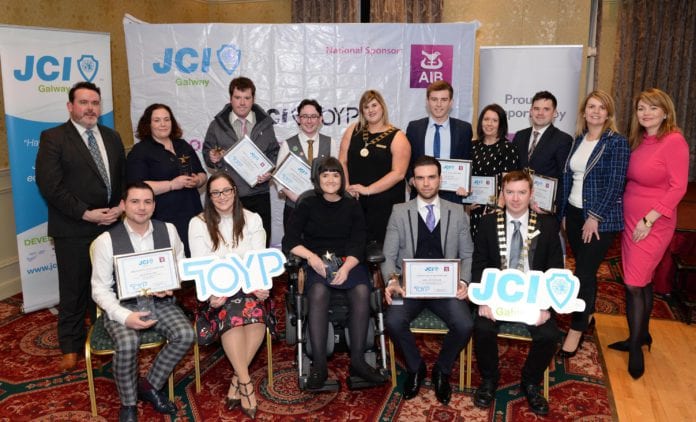 Ten outstanding young people from across the county have received awards in the Galway Ten Outstanding Young Persons Award 2019 at a ceremony in Galway Bay Hotel.

Three young people from this group were then chosen to represent Galway at the national finals in Dun Laoghaire where another ten young people, from across the country, will receive awards across different categories.

The highly-esteemed initiative from the Junior Chamber International Galway aims to recognise young people who are making great progress in their chosen fields and creating a positive impact on other people, their community and society.

A total of 38 young people were nominated for the awards this year.

JCI Galway President Keith Killilea said: “We hope that there will be more outstanding young people to be seen and recognised as we can see that there are many young people based in Galway breaking boundaries with personal achievements, business accomplishments and creating positive change in their communities.”

After this amazing Top Ten was selected, the judges had the tougher job of selecting the top three winners to go on to the National Awards run by JCI Ireland.

The awards ceremony will be held in Royal Marine Hotel in Dun Laoghaire on May 18th and Aisling Glynn, Sean Rowland and Niall McDonagh will represent Galway as nominees at these awards.

If they are selected for JCI Ireland’s Top Ten then they will be put forward for the JCI World TOYP awards.

These awards recognise winners from all over the world at the 2019 JCI World Congress in November in Tallinn, Estonia.