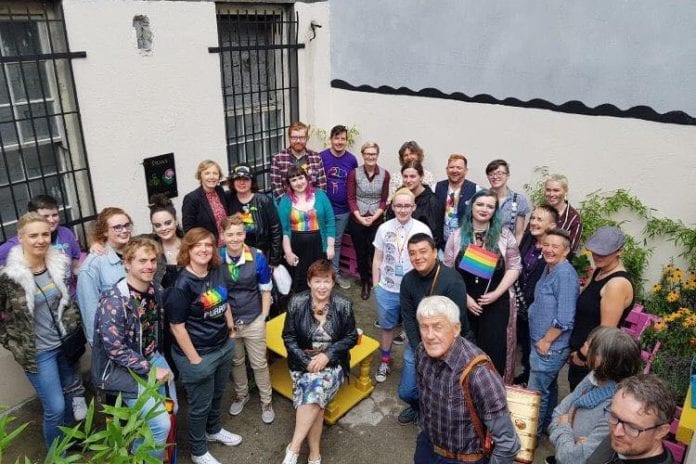 The local community in Galway has rallied to the aid of Teach Solais LGBT+ resource centre since Amach! LGBT+ warned that this important hub would shut unless a funding crisis could be addressed.

A emergency meeting to address the funding crisis facing Teach Solais held recently was packed out with members of the LGBT+ community and supporters, local elected officials and political and community activists.

Amach! Chairperson Cameron Keighron and Vice Chair Maria Molloy presented an overview of the services on offer at the resource centre, the people they collaborate with in the community, and the challenges currently facing them.

The meeting was well attended by local representatives including TDs Hildegarde Naughton, Seán Kyne, and Catherine Connolly along with Mayor of Galway Niall McNelis and multiple city and county councillors.

All presented expressed their support for Teach Solais and spoke to the incredible service it provides across Galway city and county.

Deputy Naughton committed to setting up an urgent meeting with Health Minister Simon Harris following the recent disappointment of an application for sustainable funding from the HSE.

While Seán Kyne, who is Minister of state for the Gaeltacht, suggested that there may be funding opportunities from his department due to the Gealtacht and rural element of the work Teach Solais undertakes.

Local candidates for election to the councils and Dáil also attended and expressed their support for the resource centre.

There’s been an outpouring of support from more than just political representatives. The ‘Save Our Teach Solais‘ crowdfunding campaign has already raised more than €5,000 on Gofundme in less than 20 days out of a goal of €18,000.

Others in attendance at this meeting, community members and allies of the LGBT+ community in Galway also spoke of the place Teach Solais now has in Galway, as a welcoming place, a site of refuge for many isolated and marginalised people, offering support and making suggestions of how funds might be raised.

Amach Chair Cameron Keighron thanked everyone for attending, stating the crowd was far more than they expected, but the show of support was most welcomed.

He reiterated the dire financial situation, and that without stable ongoing funding the resource centre could not continue.

Current funds will keep the service operating for the next few months, but the current conditions mean Teach Solais would be closing come November 2019.