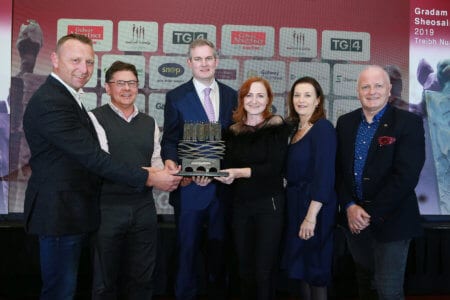 A large crowd turned out yesterday to support the Irish language achievements of many businesses in Galway where Sweeney Oil was named the winner of Gradam Sheosaimh Uí Ógartaigh 2019.

Galway TD and Minister of State for the Irish Language Seán Kyne handed out the awards to the Gradam winners on Monday night.

“”It’s great to see the increased visibility of the Irish language within your businesses and organisations as well as the positive impact that it has on you, as a business owner, manager, or member of staff in our bilingual city,” Minister Kyne said at the wwards.

Sweeney Oil was named as the winner of the ‘Services Category’ sponsored by Snap Galway and they went on to scoop the overall award on the night.

This is the third year running that Sweeney Oil have entered the Gradam. The consistent focus they put on Irish was seen last year when they won in their category, and last night night’s victory shows how they have continued in that vein.

The Irish language is prominently displayed on Sweeney Oil’s signage, website, advertising, marketing material, and they have several members of staff can provide ‘Seirbhís trí Ghaeilge’.

A special award was created for the 2019 competition, the Bronnadh Speisialta na Moltóirí, to acknowledge a business which entered the Gradam for the first time and displayed an incredibly high standard.

This award was given to the Galmont Hotel & Spa, while a University Scholarship for the language acquisition course ‘An Dioplóma sa Ghaeilge’ at NUIG was awarded to Galway Volunteer Centre.

Mayor of Galway Niall McNelis said that the Gradam and the work done by local businesses are “an excellent opportunity for us in Galway, to showcase and acknowledge the true spirit of bilingualism in our city.”

Each of the winners will receive a business package to the value of €2,000 from their respective category sponsor as well as a replica of Gradam Sheosaimh Uí Ógartaigh sponsored byÚdarás na Gaeltachta.

Cathaoirleach of Ghaillimh le Gaeilge Bernadette Mullarkey said that these businesses all showed “positive acknowledgement of the valuable market of Irish Speakers in Galway City and County”.