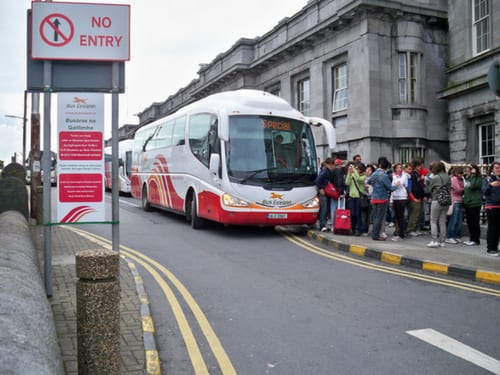 Students travelling by bus in Galway will be able to take advantage of cheap day long tickets from today.

As part of a major shake up to its fare structure, the National Transport Authority is introducing a flat rate of €4 for a 1-day tickets for students in Galway, Limerick, and Cork cities.

Adult and Child day tickets in the Galway city commuter zone will each increase by 10c under the new fare plan.

Other changes are also being made to regular public transport ticket prices in Galway city.

The Galway city commuter zone was expanded in December 2017 to include Barna and Oranmore.

Bus Eireann intended for there to be two levels of ticket price based on journey length, but were unable to implement that at that time.

From today there will be a two-tier city fare structure, with passengers travelling more than 7.5km paying the higher tier fare.

For intercity train services, the NTA has indicated that student ticket prices could rise by as much as 13% in the future.

However they also said that these price increases would largely apply to tickets bought at the ticket office rather than online.

“As almost all students can book rail tickets on their smartphones practically no student will be obliged to pay these higher fares,” the fares determination report concludes.

As it stands now, the NTA says that student intercity tickets are so cheap that large numbers of students only buy just before travelling.

This makes it harder for Irish Rail to predict train loading in advance, and often results in overcrowded trains, something that’s been a source of constant complaint on the Galway-Heuston line.

The total annual revenue from fares taken in by the NTA comes to approximately half a billion each year.

In 2019, the revenue taken in from public transport fares is expected to increase by €1 million

The full report on changes being made to public transport fares nationwide can be found on the NTA website here.