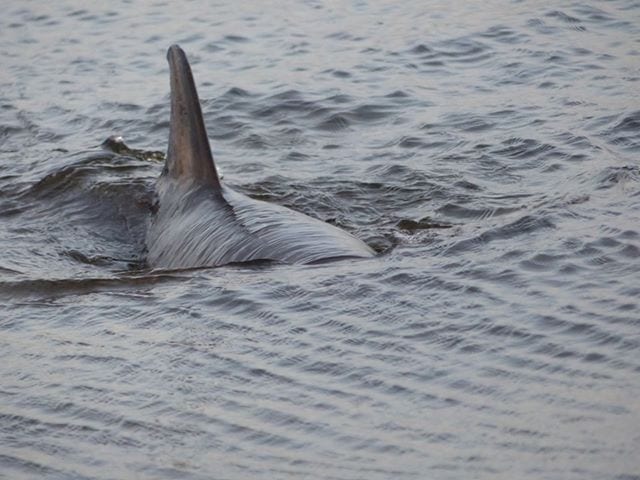 A dolphin which became stranded at Mutton Island was saved by the presence of a local man and two Australian tourists who helped it back to sea.

The Irish Whale and Dolphin Group reported the story of a bottlenose dolphin which became stuck in shallow water near Mutton Island, but was saved by a local man named Jason and a pair of concerned tourists.

“It happened when I met a husband and wife that were visiting Ireland from Australia,” Jason told the IWDG.

I was telling them about our resident bottlenose dolphin “Nimmo” who is frequently seen off Nimmo’s Pier, in Galway City.”

“They were asking me about Mutton Island which I said was beautiful and you should go there.”

About 1 hour later I was walking down to when I met them again she said ‘we saw the dolphin there’. I said where about, she said ” in calm water near the lighthouse”.

I just knew it was in trouble so I ran down and the dolphin was out of the water alive.  A young man walks over to help, and then a young women who came in too. I have to say they were amazing.

“At this point the tide was going out so I decided as they were wearing scarfs we could use them to move the dolphin.  I made the decision to take it out of the water and lift it to the back of the island to deeper water.

“The four of us did that and were in the water I just went the rest of the way as it was getting dark at that point. With one final push it just started to swim away.”

“I can’t explain how I felt and we did it as a team. An incredible thank you so so much to those who helped, you were amazing thank you.”