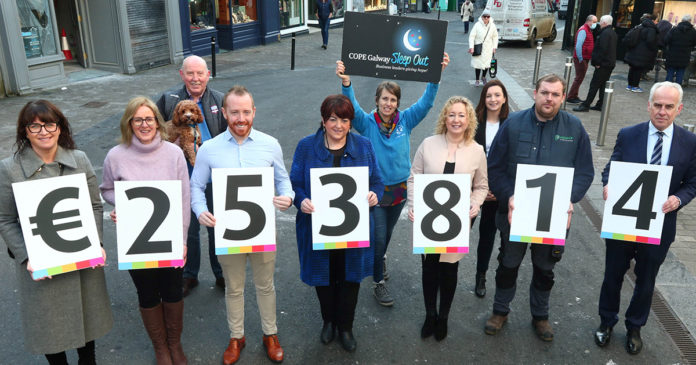 More than a quarter of a million euro was raised for COPE Galway to combat homelessness in the annual sleep out by local business leaders before Christmas.

The event raised a total of €253,814 for COPE’s homelessness services, which are in ever greater demand in the housing crisis.

Heartbreakingly, for some 37 children it was their second or third time spending Christmas in emergency accommodation.

COPE Galway’s Homeless Service Manager, Sinead Carey said that seeing the people committed to the sleep out, encouraged by their families, “really brought home the commitment and unity of our community in supporting our work and our clients.”

“As the night progressed and the weather worsened, things got tough; we began to feel weary and cold; we were looking forward to going home”.

“It became an important moment of reflection on what it means to be homeless, to have to do this every night and not have your own home to return to.”

“I was struck by a feeling of ‘much done, a lot more to do’ in addressing homelessness in Galway.”

At a recognition event for the extremely successful fundraiser last week, Cliodhna Donohue, Youth and Family Outreach Worker, described the damaging impact that living in confined settings such as B&Bs or hotel rooms has on children.

In thanking people for taking part, some of whom have participated over several years, COPE Galway CEO Michael Smyth spoke of the sense of togetherness, community and pride that was palpable at every touch point of this event.

“The money you have raised directly funds COPE Galway’s various projects to support individuals and families at risk of or currently experiencing homelessness.”