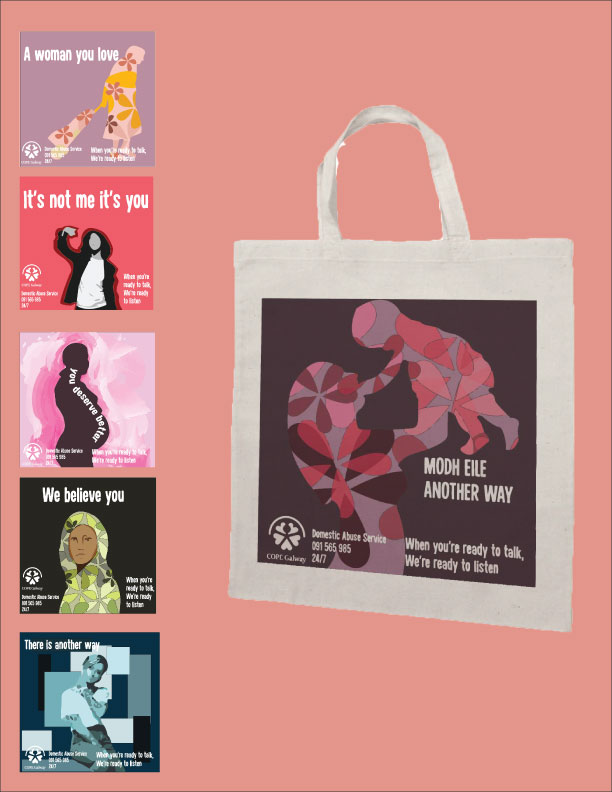 COPE Galway Domestic Abuse Service is inviting people to show their support for women who have been abused by their partners through supporting the local charity’s awareness campaigns over the next 16 Days of Activism against Gender-based Violence.

The service has partnered with a young Galway designer, Sadhbh Erika, to design a selection of tote bags with images and phrases that challenge the stereotype of what can be deemed a ‘victim of domestic abuse’.

The Carry the Bag, Share the Load campaign helps support women who need the service by showing them that they are not alone.

The bags will be available to purchase from December 10, Human Rights Day, which marks the end of the 16 Days campaign.

Each year, more than 600 women and their children use COPE Galway’s services when they find themselves in danger from a violent or controlling partner.

Carol Baumann, Head of Domestic Abuse for COPE Galway, says that this is just the tip of the iceberg.

“We know that one in five women in Ireland can expect to experience abuse from an intimate partner during their lifetime – a staggering figure,” said Carol.

“In that context, it is quite clear that services like ours see just a fraction of the many women who need support”.

She said that we often imagine that “domestic abuse happens to other people, that it couldn’t happen to someone that we know, to someone in our family.

“An abusive relationship can happen to women at any age – we meet pregnant women who are being abused, older women who have lived with it for decades, young women whose very first experience of love turns out to be abusive. “

“‘Carry the Bag, Share the Load’ is about raising awareness of this – that abuse happens to women that we love, women who deserve so much better in their lives, who have been made to feel it’s their fault, and who think that no-one will believe them.

I’d encourage all of Galway to get behind this important campaign.” From Friday December 10, the bags are available for €3 through the COPE Galway shop on St Augustine Street, or online at copegalway.ie/shop.”

Also this year, COPE Galway are proud to be a part of the One Million Stars campaign which began in Melbourne, Australia in 2012, when an Irish woman, Jill Meagher, was murdered.

Each Star symbolises light, hope and solidarity, with over 4 million stars weaved worldwide.

Stars weaved by community groups, women and children using the supports of COPE Galway Domestic Abuse Service are on display with the support of Supermacs at Eyre Square and the N6 Plaza. All are welcome.