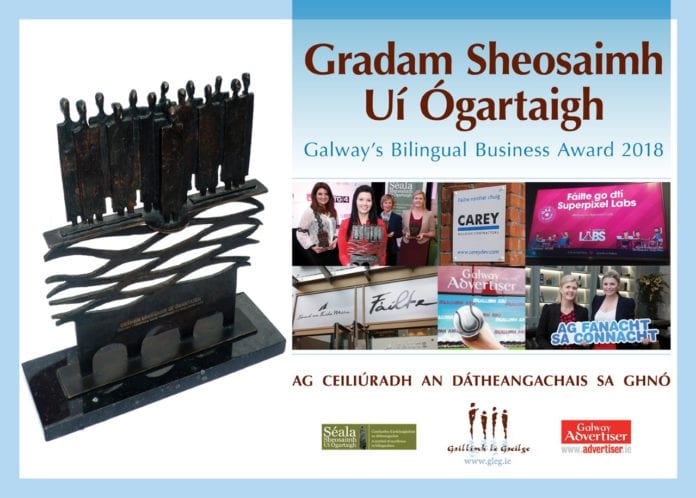 The Shortlist for Gradam Sheosaimh Uí Ógartaigh 2018 is to be announced early next week.

The Mayor of Galway city, Cllr. Pearce Flannery, will announce the finalists of Gradam Sheosaimh Uí Ógartaigh 2018, at 12 midday, Tuesday 24th of April at a press event which will take place in ‘Téatar Uí Chearbhalláin’, Áras na Gaeilge, NUI Galway.

“This is the second year in a row where we have a record number of new entries. While we always welcome previous participants to the Gradam, it’s always exciting to see newcomers taking part.

“The Gradam process is a wonderful opportunity for any business or organisation to showcase the Irish language in their business and this year’s participants will do so, with ‘pride, passion and purpose.’

“It’s great to see that ‘doing business bilingually’ is increasingly becoming the norm in our city.”

Moltóirí Gradam Sheosaimh Uí Ógartaigh will meet for the first time this week with the difficult task of choosing the finalists for Gradam 2018.

Gaillimh le Gaeilge would like to say a ‘míle buíochas’ to the impressive line-up of sponsors who contribution is invaluable to the success of the Gradam and also to extend a ‘céad míle fáilte’ to our new sponsor Lorg Media.

The main media sponsor is the Galway Advertiser; the company has proudly supported the Gradam since its inception in 2002. TG4 joined the Gradam in 2016, and both media organisations are providing an excellent advertising package for the overall winner.

You can see the list of the nominees here and we will have information on the shortlist once it has been announced next week.