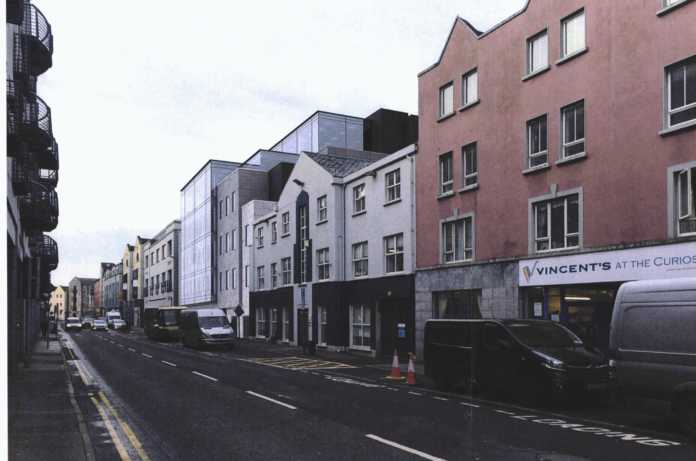 Plans are back before the city council for the second time for a multi-million office development in the city centre.

The O’Malley Group (Homes and Development) Ltd is seeking planning permission for an expansion of the Hynes Building on Augustine Street, and the demolition and replacement of a nearby office building.

The proposed project would involve the demolition of the building known as the St. Clare’s Walk building, and the construction of a new six storey office building complete with a junior library in its place.

The developer is also seeking approval for the construction of two new floors over the Hynes Building for office use.

The Hynes Building is currently a three storey building which contains the city library on the ground floor, and offices on the two floors above.

Part of this development would also involve an extension to the ground floor library at the Hynes Building.

Both the city council and An Bord Pleanála previously rejected a similar application for the addition of new floors to the Hynes Building and the construction of a new office block by the O’Malley Group.

The reason for the refusal was that the scale and design of the proposed development would have an “overbearing” effect on the surrounding streetscape, and would be contrary to proper planning for the area.

The plans which have been resubmitted to the city council are a storey shorter on both the new office building to be constructed, and for the extra floors to the Hynes Building.

Galway City Council is due to make a decision on this planning application by February 20.