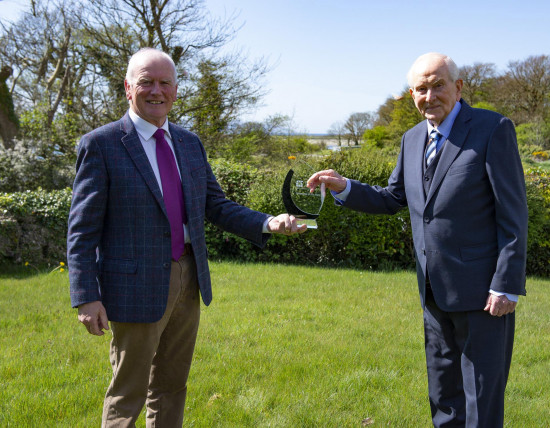 Former Galway City and County Manager, Mr. Seamus Keating has been awarded the inaugural ‘Innovator of the West’ award from Galway Technology Centre.

Mr Keating received the award from GTC Chairman, Frank Greene as they prepare for the major Scaling up Our Legacy event which is taking place this morning.

He was chosen as the inaugural recipient of this prize for his role in establishing Galway Technology Centre more than a quarter of a century ago.

In 1994, after the closure of the Digital Equipment Corporation’s Galway facility he was chosen by the government to lead a task force which became the driving force behind the establishment of the GTC.

The work of that task force proved to be such as successful model that it was copied many times on subsequent occasions.

“It would be fair to say that Seamus Keating was pivotal to the creation of Galway Technology Centre,” said Frank Greene, “Without his immense contribution during those very difficult times for Galway and the West it would not have been possible to establish the centre”.

“A facility which has gone on to support more than 300 companies, over 3,000 jobs and contributed €1.3 billion gross added value to the west region.”

Frank also highlighted that the GTC was the first such centre focusing on innovation in technology in Ireland.

“We are immensely proud that list of recipients will begin with the name of Mr. Seamus Keating. We thank him for all he has done for Galway Technology Centre and we are deeply honoured he agreed to accept this award as part of our Scaling Our Legacy anniversary celebrations,” Mr. Greene concluded.

Galway Technology Centre will announce this morning that it expected to create 12,500 jobs over the course of the next 15 years with with its expansion of AcademyWest.

At the anniversary event this morning celebrating more than 25 years of the GTC, plans will be officially unveiled for the major expansion, which will see €1.4 billion invested over the next 15 years.