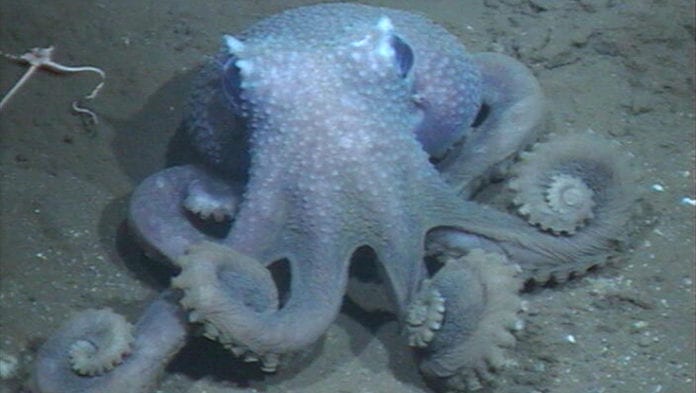 It’s commonly accepted that you shouldn’t judge someone based on their appearance, but you can tell a lot about an octopus by how warty they are.

A study carried out by zoologists at NUI Galway recently found that an octopus living in deep water will have more warty skin than their counterparts lounging in the shallows, despite belonging to the same species.

Scientists weren’t sure if these octopuses were even members of the same species, and they didn’t know how to explain the differences in the animals’ looks.

But in this new study from NUIG and The Field Museum of Natural History in Chicago, DNA analysis was done on octopuses from different depths that proved they were the same species despite their radically different appearances.

It turns out that as they make their homes deeper in the ocean, an octopus’ skin becomes bumpier and their bodies smaller.

Prof Louise Alcock is the Head of Zoology at NUIG’s Ryan Institute and co-author of the study responsible for analysing the DNA data.

“We really weren’t sure what the DNA would tell us,” Prof Alcock admitted.

“Warty octopuses occur throughout the deep oceans of most of the world, including all the way down to the Antarctic, and there are real issues in determining the true number of species.”

“From many locations we only have one or two specimens, because they live in really inaccessible habitats, so we had very little experience as to how much individuals of any given species might vary.”

To figure out if the smooth and warty octopuses were the same species, the scientists examined 50 specimens that were classified as Graneledone pacifica, the Pacific warty octopus.

Plunging deep into the ocean in ALVIN, a human-occupied submersible vehicle, Janet Voight from the Field Museum in Chicago collected some of the octopuses from the Northeast Pacific Ocean.

The deep-sea specimens were smaller, with fewer arm suckers, and, most noticeably, bumpier skin than those from shallower depths.

Comparing the octopuses’ DNA sequences revealed only minor differences, supporting the idea that they were all the same species, despite looking so different.

“If I had only two of these animals that looked very different, I would say, ‘Well, they’re different species, for sure.’ But variation inside animal species can sometimes fool you,” Janet Voight said.

“That’s why we need to look at multiple specimens of species to see, does that first reaction based on two specimens make sense?”

“Sometimes when animals look different from each other, scientists can be tempted to jump the gun and declare them separate species, especially in the deep sea, where very little is known about animal life and scientists often don’t have many specimens to compare.”

Scientists aren’t sure why the variations in skin texture occur with depth. But they do have a hunch about the size difference.

The current theory is that these octopuses usually eat creatures from the sediment on the ocean floor, passing food from sucker to sucker and then crushing their prey like popcorn.

“There’s less food as you get deeper in the ocean. So these animals have to work harder to find food to eat. And that means at the end of their lives, they’ll be smaller than animals who have more food.”

This study, which shows that different-looking octopuses can still be the same genetic species, could help researchers down the line trying to identify life forms in the deep sea.

Remotely operated vehicles collect video footage of the ocean floor, and it can be used to estimate the number of species present, if known what they look like.

The results of this study were published this week in the Bulletin of Marine Science.