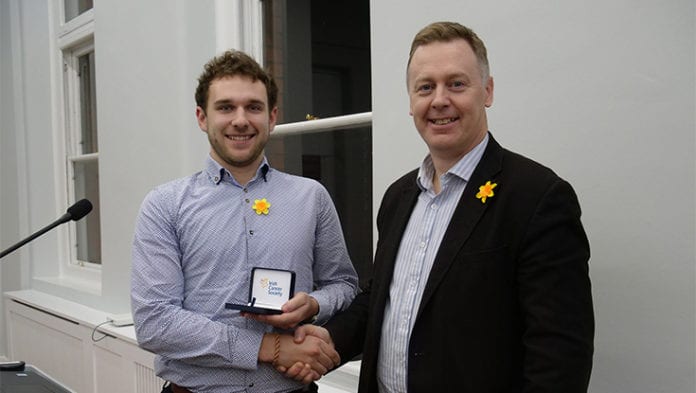 John, currently completing his PhD at NUIG, was presented with this award for his research into Multiple Myeloma, a type of blood cancer for which there is currently no cure.

The research team John is part of has focused on a type of immune cell called Natural Killer cells that normally destroy cancerous cells, but are unable to detect those of Multiple Myeloma.

They are working on boosting the effectiveness of these Natural Killer cells so that they can successfully detect and destroy Multiple Myeloma cells, in a development that would revolutionise treatment for the disease.

Commenting on the award, John Daly said he was absolutely delighted with the news, and not just for himself.

“A lot of hard work has gone into this so far, not just from me but everyone in my group, and particularly my supervisor and co-supervisor, Professor Michael O’Dwyer of NUI Galway and Dr Mattias Carlsten, Karolinska Institute.”

“Things like this are really encouraging and motivating for the next couple of years as we try to move our research on.”

Michael O’Dwyer, Professor of Haematology at NUIG, said that he is extremely proud of John’s achievements.

“This is a reflection on his own hard work, the supportive ecosystem in my laboratory, our collaboration with the Karolinska Institute, and of course the generous support of the Irish Cancer Society.

He added that John’s work is helping to usher in a new era of immunotherapy treatments making use of genetically modified immune cells.