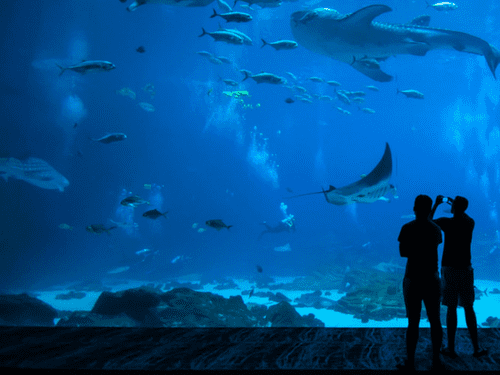 Galway Atlantaquaria, Ireland’s national aquarium, is leading a nationwide effort to teach the next generation about the importance of the ocean, and its influence on our lives.

The Irish Ocean Literacy Network is a collaboration involving 40 organisations and 100 individuals which aims to help create an ‘Ocean Literate Society’ in Ireland, which hopes to ensure sustainability in our usage of the ocean.

With Galway Aquarium leading the group as its Secretariat, the IOLN involves partners in industry, education, government organisations and charities.

“While our ocean covers two-thirds of the Earth’s surface, the vast majority of people know very little about our ocean and its influence on our lives,” said Dr Noirin Burke of Galway Atlantaquaria.

“To ensure a healthy ocean for us now and for future generations, we all need to be better informed about how the ocean affects us and how what we do affects the oceans.”

Not only is Galway home to the national aquarium, but it also houses the Marine Institute, Ireland’s national ocean research institute, out in Oranmore.

The Marine Institute has long played a massive role in outreach programmes to teach young people about the ocean, and the role it plays in our lives..

More than 12,000 primary school students from all around the country take part in the Institute’s Explorers Education Programme each year.

This enthrals young people with hands on exposure to the all the things under the sea with marine projects, seashore safaris and classroom aquariums, as well as producing educational materials for teachers to make use of.

“It is really important to cultivate an interest in the ocean from a young age, so that they understand how important the ocean is to our society,” said CEO of the Marine Institute Dr. Paul Connolly.

The Marine Institute also hosted the first All Atlantic Summer School in 2019, which involved 23 Youth Ambassadors from 15 countries.

Since being founded in 2016, the IOLN has fostered many initiatives to increase ocean awareness in Ireland, and is now collaborating further afield as well.

As a member of the EuroGOOS (European Global Ocean Observing Systems) Ocean Literacy Network, the IOLN is cooperating with experts from 20 organisations across eight countries.

The IOLN also participated in the first Ocean Literacy Summit on World Oceans Day in June 2020 where the successes of the Ocean Literacy community worldwide were celebrated and shared, enabling collaborations to transform scientific knowledge into action at a local level.

“We are delighted to connect with other organisations across Europe – as a collective we can reach broader audiences and generate a larger impact,” Noirin Burke said.