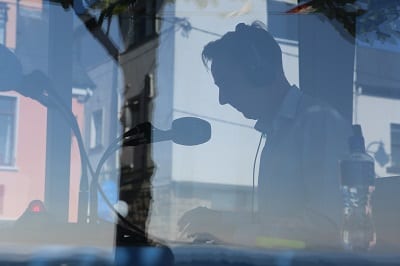 The Ryan Tubridy Show will broadcast from Inis Mór this summer as part of a new campaign to promote the Wild Atlantic Way.

Fáilte Ireland is bringing Ryan Tubridy and the RTÉ Radio 1 crew all along the west coast in their new marketing campaign to ‘Embrace the Wild Atlantic Way of Life’ this summer.

Inis Mór will be the last stop on the tour known as ‘Tubs on the Wild Atlantic Way’ with a live broadcast from the Kilronan Tourism Office on June 6.

During his time on the largest of the Aran Islands the radio and television presenter will explore Inis Mór by horse and trap and visit the stunning Dun Aonghasa.

“The Wild Atlantic Way is calling and we’re taking to the road to visit just some of the most beautiful and welcoming spots along the route,” said Tubridy, speaking about the upcoming tour.

“From Donegal, to Sligo, Clare and the Aran Islands we’ll be weaving a piece of the Wild Atlantic Way magic into our listeners days and, as ever, I’m looking forward to getting out and meeting the locals and characters along the way.”

The show on Inis Mór will involve interviews with local tourism businesses from the surrounding area and discussing some of the many activities and experiences available to anyone touring the Wild Atlantic Way.

“He can really get across to his listeners what the Wild Atlantic Way is all about and how it captures people’s imagination.”

This is the sixth year in a row in which his shows has toured the west to promote one of Ireland’s most successful tourism initiatives.

“We are delighted Ryan will get to experience some of the great tourism highlights during his visit along the route and of course that fantastic Irish hospitality on the Wild Atlantic Way,” Joan Crawford added.

In the week prior to the Inis Mór show Ryan Tubridy will be visiting Donegal Town; Sligo Town; and Ennistymon, Co. Clare.