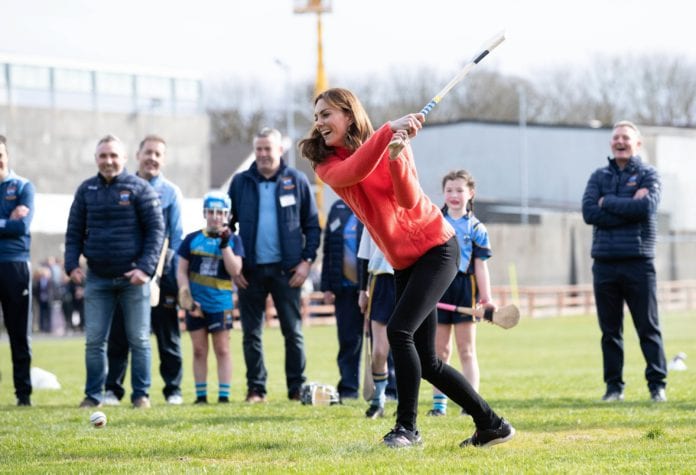 The Duke and Duchess of Cambridge wrapped up their three day Royal visit by trying their hand at hurling in Salthill this afternoon.

Salthill-Knocknacarra GAA Club was the last destination of the Royal visit which had already seen them get a taste of Galway 2020 and take in some trad music at Tig Coili.

While they were down in Salthill, William and Kate swapped out the suit and green polka dot dress for more practical gear while they tried their hands at hurling and gaelic football.

The visit’s schedule ended up being delayed by more than an hour this morning after some early fog prevented their helicopter from taking off.

But that didn’t stop any of the planned events from going ahead, with Mayor Mike Cubbard, Deputy Mayor Donal Lyons and City Manager Brendan McGrath rolling out the welcome mat at Tribeton.

There the royal couple were treated to a slice of what’s expected during the European Capital of Culture year, presented by Galway 2020 CEO Patricia Philbin.

They also met with the teams behind several Galway 2020 projects including Sea Tamagotchi, Livefeed, Hoops, Galway Community Circus, and the 2020 Community Cast.

Afterwards they got to sit in on a trad music session at Tig Coili pub on Mainguard Street, famed over Ireland for its commitment to Irish music.

Large crowds of several hundred people gathered outside to greet the Royal couple when they came out of Tig Coili, where they stopped to greet and shake hands with many of the enthusiastic spectators.

After Tig Coili the two took a gander around Shop Street and the pedestrianised city centre of Galway, where the received a strong welcome.

The final stop of the day was at Salthill-Knocknacarra GAA Club where William and Kate both had a go at gaelic football and hurling alongside the club’s young members.

Large number of Gardaí from around Galway and the region were drafted in to provide security for today’s visit.

Traffic restrictions were in force earlier today in the city centre and Salthill, as well as rolling closures while the Duke and Duchess travelled from location to location, but these have all since been lifted.