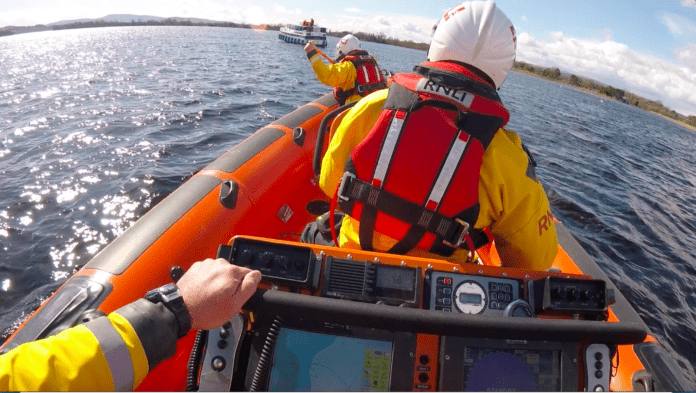 Six people stranded on a boat in Lough Derg were rescued by the RNLI after it became stuck on rocks last weekend.

The lifeboat crew were called out shortly after 3pm last Friday after a 37ft cruiser ran aground on rocks north of Hare Island.

Winds were northerly force 3/4, gusting to force 6 at the time of launch, with visibility affected by frequent squalls.

At approximately 3:30 the lifeboat found the cruiser inside the navigation mark with its bow up on the rocky shoal. Standing off, the lifeboat observed that the casualty boat was rocking from side to side.

Using charts and electronic navigation, and with an RNLI crew member taking sounds from the bow, the lifeboat plotted a safe approach to the stern of casualty vessel.

Once they were alongside, one of the RNLI volunteers boarded the stricken boat to check beneath the floorboards and in the engine housing to ensure there was no water coming in.

Given the conditions, location and circumstances, the helm made the decision to set up a tow and to take the casualty astern off the rocks.

At 3.59pm the lifeboat had the cruiser off the rocks and out in safe water. The RNLI crew member on the boat again checked that there was no water coming in, and that the drives and rudder were in working order.

With an RNLI volunteer remaining on board, and the lifeboat in company, the cruiser made way under its own power to Garrykennedy Harbour.

Aoife Kennedy, Deputy Launching Authority at Lough Derg RNLI, advises boat users to, “study your charts when planning your passage, anticipate each navigation mark along your route and keep a constant lookout”.