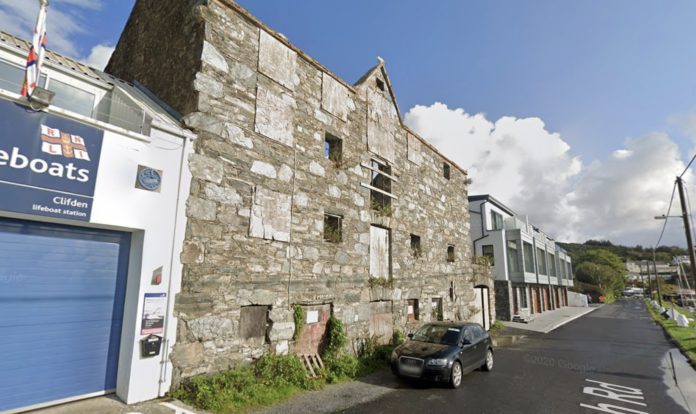 Plans have been submitted to the county council for the restoration and refurbishment of the derelict 19th century Grain Store in Clifden.

Planning permission is being sought by a Paddy Foyle to refurbish and redevelop the old warehouse building, which is in a dire state, with no roof and much other damage.

When refurbished, the Grain Store building would contain a commercial unit on the ground floor, and three one bedroom apartments above.

It’s proposed that each of the apartments would have a glazed balcony, in order to provide private amenity space, while minimising the visual impact it would have on the historic building.

The works would also involve building an extension to the rear of the protected structure, and other site works.

A cover letter for the application states that the derelict building is in a very prominent location along Clifden Quay.

This project “provides an opportunity to further develop the Quay for the use of both local residents of the town and for tourist,” it says.

Other planning documents state that the existing street facing side of the building will be retained in its entirety, with only minimal works on the façade.

The new walls being built are inside the now hollowed out shell of the building, and the extension to the rear will not be visible from the street.

Galway County Council is due to make a decision on this planning application by July 6 of this year.