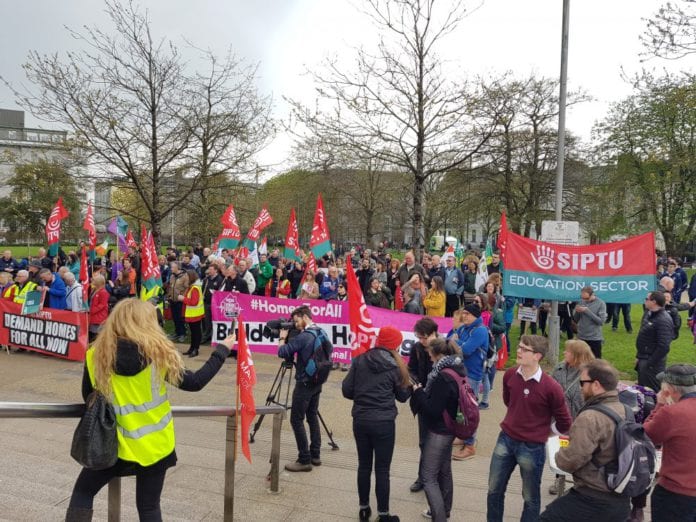 Crowds of demonstrators gathered for a Raise the Roof rally in Eyre Square this afternoon calling for radical action to tackle the housing crisis gripping Galway and Ireland.

Trade Unions, students, homelessness activists, and the travelling community came together for a rally under the banner of Raise the Roof to highlight the need for housing equality.

The demonstration took place ahead of a meeting of Galway city council which is hearing a motion calling on the government to declare a housing emergency.

It asks the government to dramatically increase spending on local authority social housing, implement the Traveller Accommodation Plan in Galway, and establish a legal Right to Housing.

The motion was brought forward by Mayor of Galway Niall McNelis, similar to motions passed by other local authorities around Ireland.

The Dáil itself passed a cross-party motion last October 3 which called for changes to housing policy along these lines, but this has not been implemented by the government.

Marin Spelman, head of the Galway Council of Trade Unions, told the crowds at this rally that this housing emergency “Is not an act of god, nor is it a natural disaster, but it has been created by bad politics.”

“If we needed any further proof of this fact,” she added, “Last week we learned that the national homeless figures exceeded 10,000 for the first time ever”.

“And that’s not to mention the tens of thousands of unknown number stuck in precarious housing and insecure accommodation, and those who are fast losing sight of ever owning their own home”.

She said that a major shift is needed in housing policy away from an emphasis on commercial development and international investors towards affordable and social hosing builds.

Karina Timothy from Threshold, a voluntary organisation campaigning for tenants rights, said that in the last few years all their efforts go towards desperately trying to keep people in their homes.

“First off the laws aren’t being enforced, but secondly the private sector is stuffed to the gills.”

“Private renting now is the only housing option for many people,” she said, adding that this leads to families, students, workers, and people dependent on housing support competing for a small supply.

Bridget Kelly from the Galway Traveller Movement said that the travellers often face discrimination when they try to find private rental accommodation.

“When it to comes to Traveller specific accommodation, there is a Traveller Accommodation Plan. And these plans are not being implemented on the local level,” she said.

The Galway Traveller Movement wants the government to impose sanctions on local authorities that do not make use of funds set aside for traveller specific accommodation, she said.

Megan Reilly, President of the Students’ Union at NUI Galway, finished by saying that while more purpose built student accommodation is needed, it should be owned by education institutes, not private developers.

The lack of accommodation has led to students living in hostels or commuting for hours every day to study in Galway, she said.

Without more accommodation, she said that “students are left to fight it out in the rental market alongside workers and families, which is certainly not what we want.”

She concluded by saying that it is important for all groups affected by this housing crisis to stand in solidarity rather than turning against each other in competition for homes.

This rally in Eyre Square is just one of many being organised by Raise the Roof in cities around Ireland ahead of major national demonstration planned for Dublin in May.